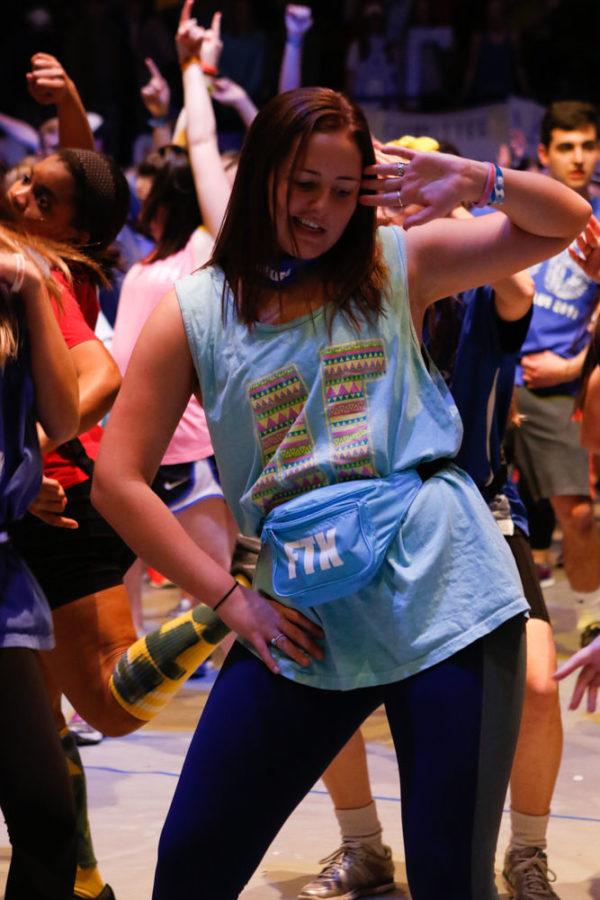 While many other students were sleeping on Sunday morning, the dancers of DanceBlue were halfway through their 24-hour no-sitting, no-sleeping marathon that began Saturday evening at 8 p.m.

Dancers filled Memorial Coliseum’s floor. The early morning hour was recess themed, so some people played cornhole while others tossed a ball.

Though there were a few yawns, the dancers — clothed in interesting fashion choices from Chacos with socks to tutus — showed no signs of slowing down.

Spanish junior Ashton Hall, a member of Kappa Delta dancing for the first time, was feeling good after 12 hours of DanceBlue.

“My feet hurt — I want to cut them off, you know, but I’ve still got a good spirit,” Hall said.

Dancers met up with their morale groups for mail call to read the messages that friends and family had submitted for them.

“It really helped,” Hall said. “I got a lot of good ones from my friends.”

Donation check presentations began Sunday morning and will continue for the rest of the marathon. Individuals and businesses presented donation checks to DanceBlue and said a few words in support of the dancers. Many of the donors had been personally affected by cancer in some way.

At 9 a.m., dancers lined up for the hourly line dance, which they learned at the beginning of the marathon. The dance lasted for more than 10 minutes and included choreographed dances to popular songs from “Footloose” to “Hollaback Girl.” Some songs, like “I Can Go the Distance” from Hercules, were encouraging, while songs like “Army” by Ellie Goulding were emotional. Spectators waved Greek letters in the air in support of the dancers.

Business Management sophomore Peyton Smith, a first-time dancer with Sigma Alpha Epsilon, was worried that he would never learn the line dance.

“But then it just all clicks when the music gets going,” Smith said. “It makes the time fly a lot faster.”

After the line dance, DJ WarrenPEACE took the stage for the rave hour. The Student Activities Board provided glow sticks.

The DJ played some eRUPPtion Zone favorites among other songs as he pumped up the crowd with shouts of, “DanceBlue, make some noise!”

The rave hour made Smith tired as he raved front and center, but at the same time it energized him.

“It got me going a little bit,” he said.

The DanceBlue marathon ends at 8 p.m. Sunday with an announcement of how much money is raised from 7 p.m. to 8 p.m.