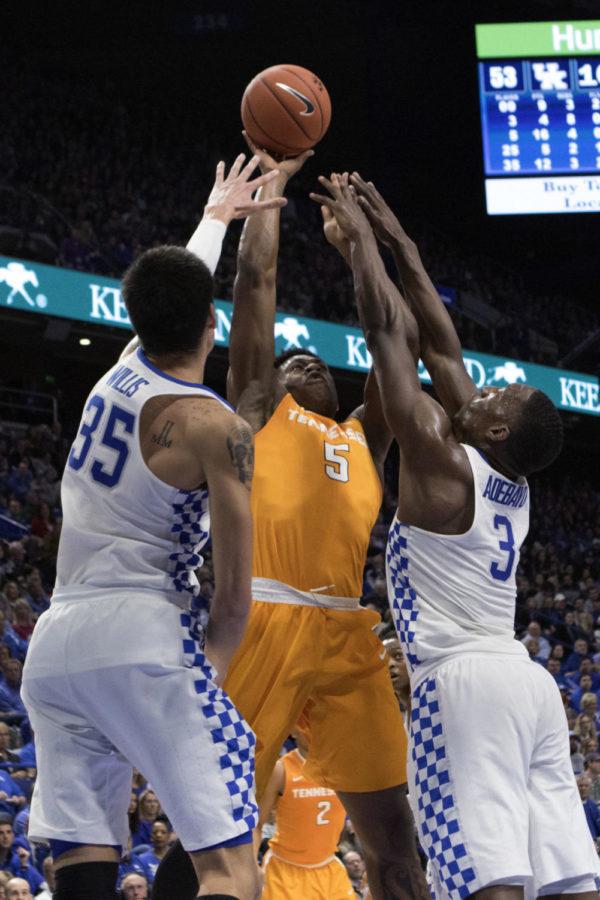 The Cats fought hard early on in the first half of the game.  They had the advantage after Georgia’s star forward Yante Maten left the game with a leg injury with eight minutes remaining in the half. Even with Maten out, the Cats struggled to keep a lead.

UK, however, played without their point for most of the first half as De’Aaron Fox picked up two fouls and was forced to sit the bench with over ten minutes left in the half. The offense struggled without him as the team shot 40 percent from the field in the half and turned the ball over nine times.

Without their point guard and with the offense struggling, the Cats turned to their seniors on the road against the Bulldogs. Mychal Mulder, Dominique Hawkins and Derek Willis contributed 13 points total in the first half and finished the game totaling 25 points.

Mulder and Hawkins didn’t contribute to the turnover epidemic in the first half, but Willis second turnover gave the Bulldogs a successful 3 pointer opportunity that ended the half 33-31.

A technical for Malik Monk started the second half off rocky. However, Monk still managed to stay in the game finishing with 16 points and five assists.

A disputed flagrant foul for Briscoe with eight minutes left in the game was later determined to be just a personal foul. However, the foul put the Bulldogs in the lead after two successful free throws, 57-55.

Turnovers and fouls hurt the Cats Saturday. Foul trouble led to the team being without Fox in the first half and Briscoe went on to foul out in the second half as well. All the fouls in turn led to some easy point for the Bulldogs who shot nearly 75 percent from the free throw line going 18-for-24 from the stripe.

In the end, Willis and freshman Bam Adebayo were key in pulling down offensive rebounds giving UK extra possessions to stay in front in a game that went down to the wire.

An Adebayo block led to free throws for Fox that put UK in front for good and allowed the team to escape with the hard fought win.