LaVar Ball gives his opinion on the UCLA and UK matchup 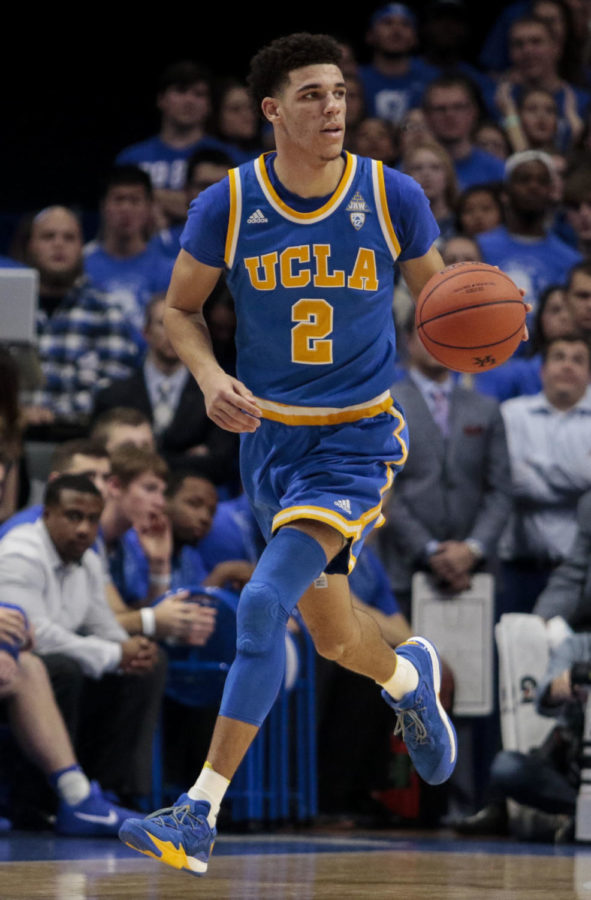 Lonzo Ball dribbles down the court during the Wildcats' game against the UCLA Bruins at Papa John's Stadium on December 3, 2016 in Louisville, Kentucky.

When UCLA beat UK in early December, not many people knew who LaVar Ball was yet, but the father of star point guard Lonzo Ball has since taken center stage.

Ball has made numerous headlines for making eye-popping comments, such as believing while in his prime he could beat Michael Jordan in a game of one-on-one, or saying that his three sons deserve a one billion dollar shoe contract.

It is clear that Ball is not afraid to speak his mind, so it should come as no surprise that Ball is already talking about the Sweet 16 matchup between the Bruins and the Cats.

Ball was a guest on the ESPN LA Morning Radio Show on Monday to discuss the upcoming game, and how he thinks it is going to be played out.

“Don’t tell them (UK) to beat them (UCLA) at running, you can’t out-run my boy (Lonzo Ball), he been running that fast all his life,” Ball said on the radio show.

To give Ball some credit, the Cats failed to keep up with UCLA’s offense the last time the two teams played in December, when the Bruins beat UK 97-92. However, both teams are completely different since then, with UK picking up some slack on the defensive end of the ball.

Ball does not seem to be intimidated by UK’s improvements on defense however, as UCLA still has that powerful offense that beat the Cats earlier in the season.

“UCLA has too many shooters, too many, and you give my boy all them shooters, you out of luck,” Ball said on the radio show.

With Ball’s oldest son leading UCLA, LaVar Ball thinks that the Bruins could beat any team in the country. Lonzo Ball has so far led the Bruins to 97-point and 79-point outings in their first two rounds of the NCAA tournament, in wins over Kent State and Cincinnati.

Regardless, Ball believes he knows how to slow down the Cats.

“You can pack it in and make Kentucky shoot the ball, they’re not the best team shooting the ball, they like to run,“ Ball said on Monday’s radio show. “At the end, if you’re in front of them, all those guys are alpha-dogs, so everybody going to turn into Michael Jordan on that team, then it’s going to be hard.”

The game between the Bruins and the Cats is considered one of the highest anticipated games of the Sweet 16, so do not be surprised to hear Ball make more comments leading up to tipoff.