UK women enters SEC tournament with momentum on their side 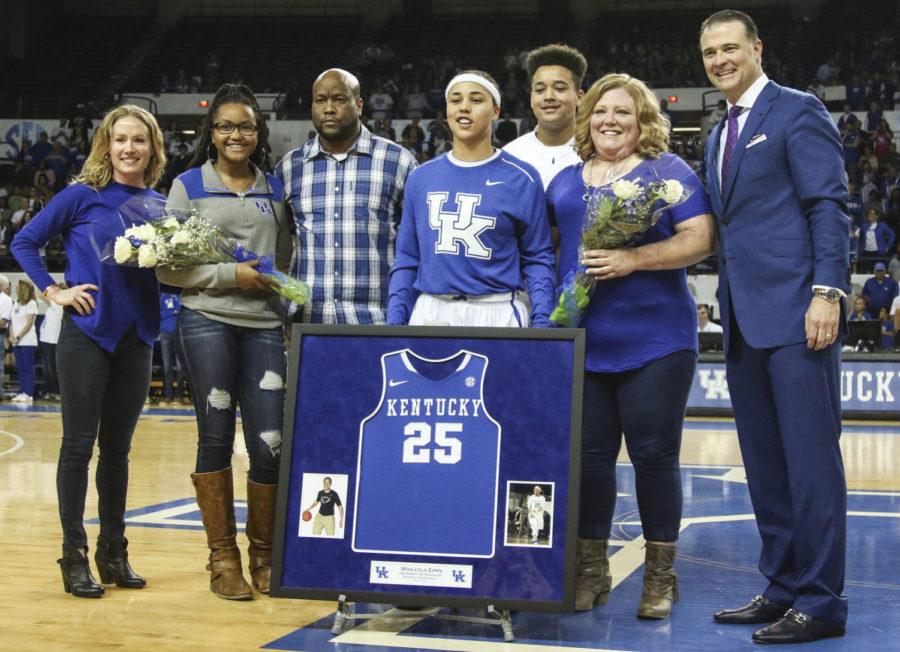 Kentucky Wildcat guard Makayla Epps poses with her family and Kentucky Wildcat head coach Matthew Mitchell during the senior night ceremony prior to the game against the Mississippi State Bulldogs on Thursday, February 23, 2017 at Memorial Coliseum in Lexington, KY. Photo by Addison Coffey | Staff.

The month of March is just days old, meaning college basketball fans everywhere have a smile on their face knowing it is time for March Madness. Luckily for the No. 20 UK women’s basketball team, they are playing the best basketball they have played all season, perfect timing for a postseason tournaments.

After going 1-2 to start SEC play, the Cats put together two separate five-game win streaks, helping them finish with an 11-5 SEC record. This was the first time since the 2012-13 season that the Cats had more than 10 SEC wins.

The 11-5 record was good enough to earn the Cats the No. 4 seed in the SEC tournament, hosted at Greenville, South Carolina. The tournament started on Wednesday March 1, but the Cats will not play until March 3, because their seeding gives UK a double-bye for the first two rounds.

When the Cats finally take the court at Bon Secours Wellness Arena, UK will play either No. 5 seeded Tennessee, or No. 12 seeded Alabama, who defeated No. 13 seeded Vanderbilt in their opening round game.

Assuming the higher seed advances, the Cats will have a chance to avenge their opening SEC loss at Tennessee. The Cats were beat by the Vols 72-65 on Jan. 1, thanks to a 21-point performance from All-SEC first-team player Diamond Deshields.

The Vols have had an up and down season, but they have recently corrected their ship by winning their last three, including an 18-point victory at No. 3 Mississippi State. Despite the threat Tennessee offers, the Cats should have all the confidence in the world when they take the court, as they have been playing great recently as well.

The Cats were riding a five-game win streak before their regular season finale loss at No. 7 South Carolina. During the win streak, the Cats outscored their opponents by just under 10 points a game.

UK also has two All-SEC first-team members on their roster in Makayla Epps and Evelyn Akhator. Epps lead the Cats with 17.1 points per game, seventh most in the SEC, but the Cats will need both seniors to keep up the good play if they hope to advance deep in the tournament.

Tipoff for UK’s quarterfinal game is scheduled for approximately 2:30 p.m on Friday.

If the Cats advance, they will likely meet No. 1 seeded South Carolina in the semifinals. The Cats are 0-2 this season against the Gamecocks, and USC is the only other team besides UK to have two All-SEC first-team players, including SEC player of the year A’ja Wilson.

The Cats got a tough road ahead of them if they hope to advance to the championship game, but if they play the way the had in February, they will have a chance to do some damage that no one expected them to do at the start of the season.