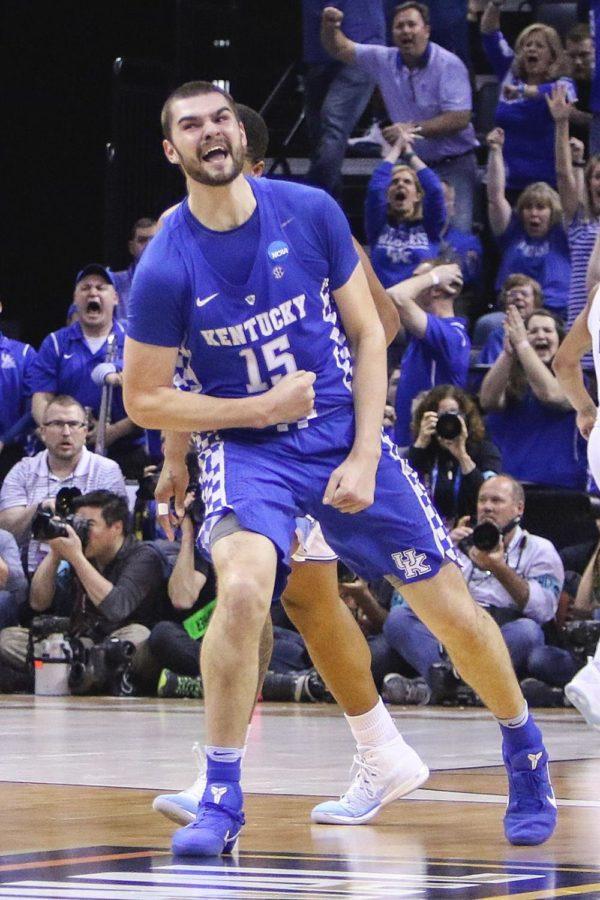 Isaac Humphries had been struggling to find his rhythm all season, but he found it when the UK men’s basketball team needed it most, in the Elite Eight of the NCAA tournament against the North Carolina Tar Heels.

Because of Humphries’ inconsistency, the seven-foot sophomore had not played double-digit minutes since Jan. 31, but he played 12 minutes in the first half alone against North Carolina because of early foul trouble for Bam Adebayo and Derek Willis. Humphries made an impact in the first half, but his biggest moments would come after the break.

“We know how good Isaac (Humphries) is, in practice he shoots lights out,” Dominique Hawkins said. “For him to step up in that moment, I’m proud of him, I knew that he had it in him.”

Up until Humphries’ scoring spurt, the Cats had spent a majority of the game trailing UNC. Humphries gave the Cats the momentum they needed late in the game.

Humphries finished with a new career-high of 12 points, and five rebounds. With the starters in foul trouble and the offense struggling to find their rhythm, Humphries is a big reason why the Cats found themselves in a position to win late in the game.

“I was in the mindset of coming out and doing whatever I could to help my team,” Humphries said. “I was given a great opportunity and I just wanted to take advantage of it.”

Humphries’ big game was also good enough to earn him a spot on the All-NCAA South Regional Team.

Unfortunately, Humphries’ heroics will be shortly remembered, as the backup forward for the Tar Heels, Luke Maye, had the game of his life as well.

After scoring a career-high 16 points in UNC’s Sweet 16 game against Butler, Maye would up his career high against the Cats to 17 points, including a game winning jump shot in the final seconds to give the Tar Heels a 75-73 victory over the Cats.

“I just kind of stepped back, and they gave me the ball, and I just shot it and luckily it went it, it was a great feeling,” Maye said.

It will be tough for the Cats to take positives out of the locker room out of the loss, but the play of Humphries could have an impact that continues into the next season.

Humphries had struggled to make an impact all season long, and to finally have the game he was looking for will be a huge confidence boost for the sophomore.

“So proud of Isaac (Humphries),” John Calipari said. “Can you imagine his first real opportunity to do this was in this game, and he performed? Amazing.”