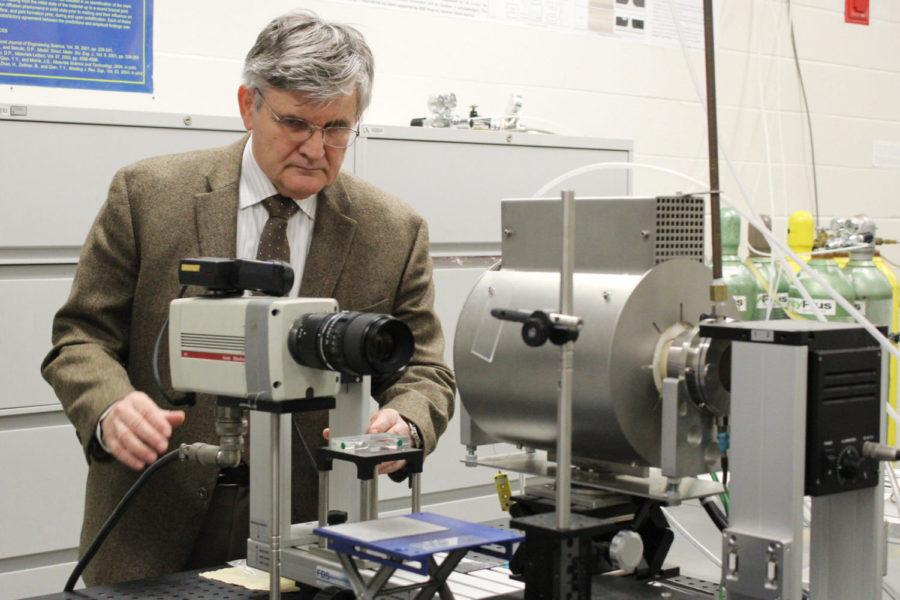 Dr. Dusan P. Sekulic examines one of his machines as he prepares for his trip overseas next week. Dr. Sekulic is a professor at the University of Kentucky in the College of Engineering.

As the global science community’s understanding of space travel and technologies develop the human world, its presence in space is growing at a steady pace. It seems almost inevitable that one day traveling through space will become a common human activity.

It is this likely inevitability that drives much of today’s cutting edge technological research worldwide. Just as the European colonizers had to learn to build a civilization in the Americas, humans have to adapt to the new frontiers in space.

Department of Mechanical Engineering professor Dusan P. Sekulic was recently appointed lead investigator in an international research effort aimed at tackling a fundamental problem in the repair and manufacturing process in space.

The research proposal, “Brazing of Aluminum Alloys in Space,” was one of 16 selected to be an experiment aboard the International Space Station (ISS) as part of the MaterialsLab program.

The project will be funded an estimated $1.2 million by NASA, the European Space Agency and the Roscosmos State Corporation for Space Activities in Russia — an international effort to help crack the problem of assembling strong, durable space structures.

“Brazing is a process of bonding similar or dissimilar materials (e.g., metals to metals, or metals to ceramics, respectively) by melting the third metal and wetting the mating surfaces with that metal, so called ‘filler,’ featuring its good spreading, and upon solidification forming an excellent bond,” said Sekulic.

In particular, the project will develop a method to improve capabilities in manufacturing rigid structures by researching the behavior of liquid metals in zero gravity environments.

This understanding can help improve our ability to weld two structures together with, for instance, aluminum, which is prepared in a liquid state to be applied to a joint. This is similar to the idea of soldering two plates together, but with the consideration of the behavior of materials in space. An extended presence in space will require the ability to construct various structures to support human life, power generation and communication as well as to conduct scientific research.

The project faces unique factors in space, including vacuums and the addition of elements like magnesium.

“The object of study is the behavior of thin layers of molten metal formed at high temperatures (around 870 degrees Kelvin or over 1100 degrees Fahrenheit),” said Sekulic. “This molten metal has a capacity to flow into the clearances between the parts to be bonded and after temperature lowering solidifies and makes a permanent joint. We monitor the wetting and spreading of liquid metal over solid metal surfaces.”

The project is “a unique international collaboration centered on UK.” the collaborating partners include: Washington State University, Professor Michail Krivelev in Russia and a team in Belgium, according to Sekulic.