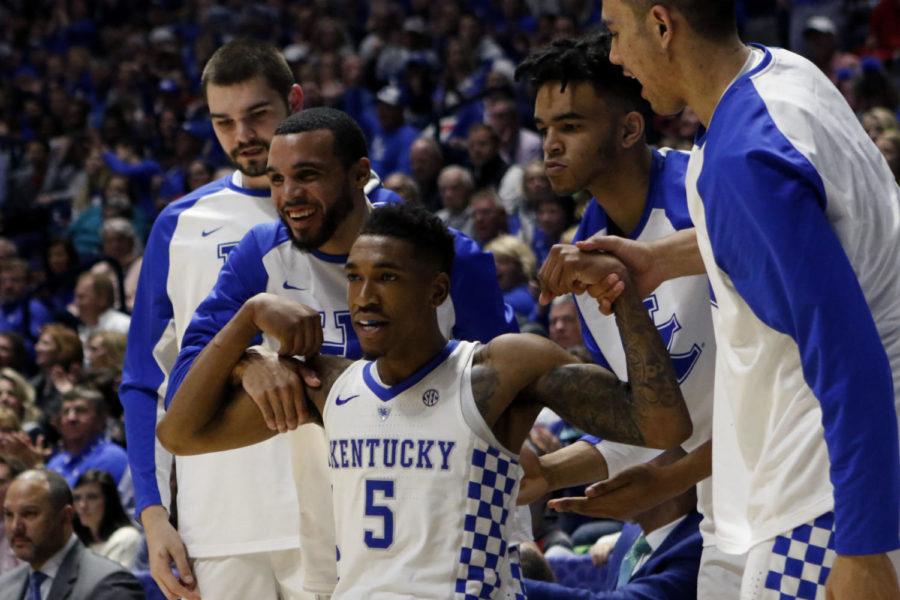 Freshman guard Malik Monk (5) celebrates with teammates after getting an and-one during the semifinal game of the SEC Tournament against the Alabama Crimson Tide on Saturday, March 11, 2017 in Nashville, Ky. Kentucky won the game 79-74.

NASHVILLE, Tenn. –  The slow starts that UK looked to have done away with in Fridays win over Georgia resurfaced again on Saturday against Alabama in the SEC Tournament semifinals, but nonetheless the Cats overcame their fourth slow start in the last five games to advance to the finals with a 79-74 victory over the Tide.

With the victory, UK as a program moved to 41-2 in SEC Tournament semifinal games and have now appeared in seven of the last eight championship games.

While it was Isaiah Briscoe who carried the load for UK Friday against the Bulldogs, De’Aaron Fox stepped up to lead the Cats into the finals on Sunday.

Fox finished with a career-high 28 points, five rebounds and two assists, but the word ‘finish’ was more than just his final totals against the Tide. Unable to pull away for good, and up just one with 5:13 left in the game, Fox rattled off nine straight points to put the Cats up eight with just under two minutes left.

The Cats went on to close the game out behind the play of Fox who proved himself as the team’s closer but it was not all that easy as UK reverted to its old habit of slow starts.

“I just kept making plays and they kept putting the ball in my hands,” Fox said. “When I know the Coach is trusting me and my teammates are trusting me, keep attacking, doing what you’re doing. All I got to do is just make the play.”

The Cats found themselves down 17-7 early, and after his big day yesterday, Briscoe picked up two fouls within the first 2:30 of the game. With Briscoe on the bench, the Cats initially struggled to find a rhythm and the Tide had no problem taking advantage, but UK responded.

An 11-0 run midway through the first half put the Cats up one and had Rupp Arena south aka Bridgestone Arena to its feet. The run was part of a 19-5 spurt that UK rattled off to not only make up for its slow start, but give itself a little breathing room even with Briscoe on the bench.

A big part of the 19-5 stretch was the struggling Malik Monk who got himself back on track in the first half to lead all scorers with 13 at the break. But despite being down nine in the first half, the Tide continued to fight back and were down just one heading into the locker room.

Down just 33-32 at the half, Alabama showed a fight and resolve that kept them in it in the first half, and allowed them to cause the Cats multiple problems in the second half.

The second half saw both teams trading baskets early and often, and it seemed as if UK was going to have a hard time closing the game out, but then Fox took over.

When Fox and UK established control of the game late in the second half, it showed that even when the Cats are not exactly clicking, that they can still hold off a team like Alabama who was playing for its NCAA Tournament hopes.

Going forward, holding off teams down the stretch will be big and with UK likely to be one of the higher seeds in the tournament, it must do a lot of that. With that being said, the Cats will be vying for their third straight SEC Tournament title on Sunday against either Vanderbilt or Arkansas.