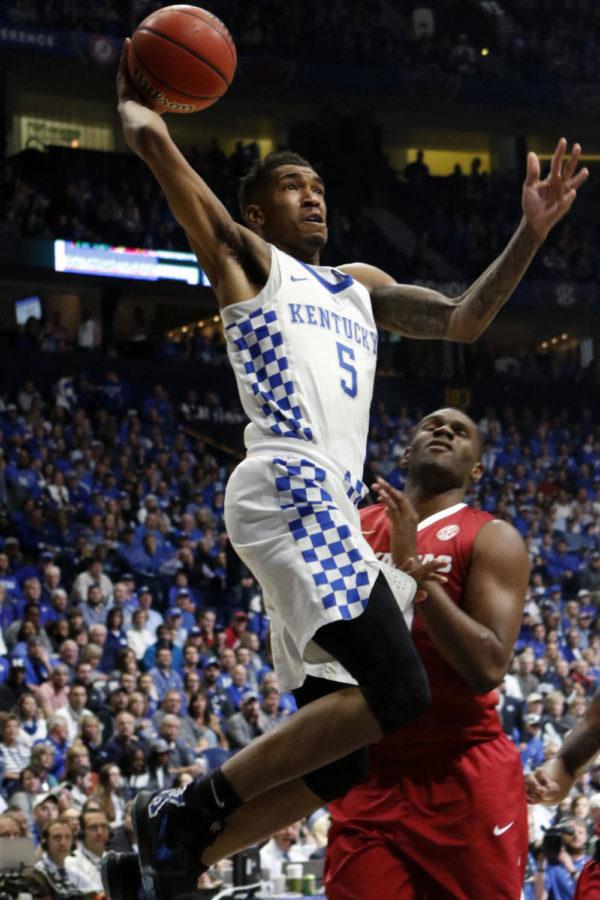 Freshman guard Malik Monk dunks the ball during the championship game of the SEC Tournament against the Arkansas Razorbacks on Sunday, March 12, 2017 in Nashville, Ky. Kentucky won the game 82-65 to win their third-straight SEC Championship.

NASHVILLE, Tenn. – While much has been made nationally about Duke’s run through the ACC Tournament winning four games in four days, very little has been made about the current run that UK is in the midst of.

Winners of 11 straight, the Cats are perhaps the nation’s hottest team; and while the Blue Devils won the ACC tournament, they lost three of four entering the postseason.

As is always the case with coach John Calipari’s teams, the real test beings in the final third of the season, and since the Selection Committee revealed its top-16 seeds in its March Madness Bracket Preview, the Cats are the only team that has since gone unbeaten.

Despite not always playing a complete game — slow starts and off nights by its sensational scorer Malik Monk — UK has overcome numerous different circumstances on this current streak. And the Cats have done that by focusing on their defense and intensity.

“I feel like we are hot right now, especially defensively,” De’Aaron Fox said after the SEC Title game. “It is not even our offense. We create offense from defense and since we have been doing that, I think it will be tough for teams to beat us.”

It has been obvious from the start of the season that offense would not be in question, and with almost all of UK’s major contributors rounding into form offensively, and now defensively, the Cats look able to handle everything that will be thrown at them.

But with its first postseason tournament behind it, UK is heading into the big dance well aware that every game could be the team’s last.

“Next week is going to be different,” Fox said. “(The SEC Tournament) is not the same type of tournament. We could have lost in this tournament and been fine and gone on to next week, but now its win or go home. We want to go in there desperate and come in there full of energy and just make it tough on people.”

The energy is not only being talked about by Fox, but it is apparent that everyone in the UK locker room feels that increase of energy by this team. That energy coupled with the increase in defensive intensity has made them a force at the right time of year.

As UK awaits its seeding, regardless of where they are sent, the Cats are going to be one of the top picks to cut down the nets in Phoenix and the team’s confidence is growing heading into the NCAA Tournament.

“I feel like we are (hitting our stride),” freshman Bam Adebayo said. “We are getting more mature, we are getting older, we are coming closer as brothers. Cal believes in us; we all believe in each other. Our confidence is high; we just have to fight.”