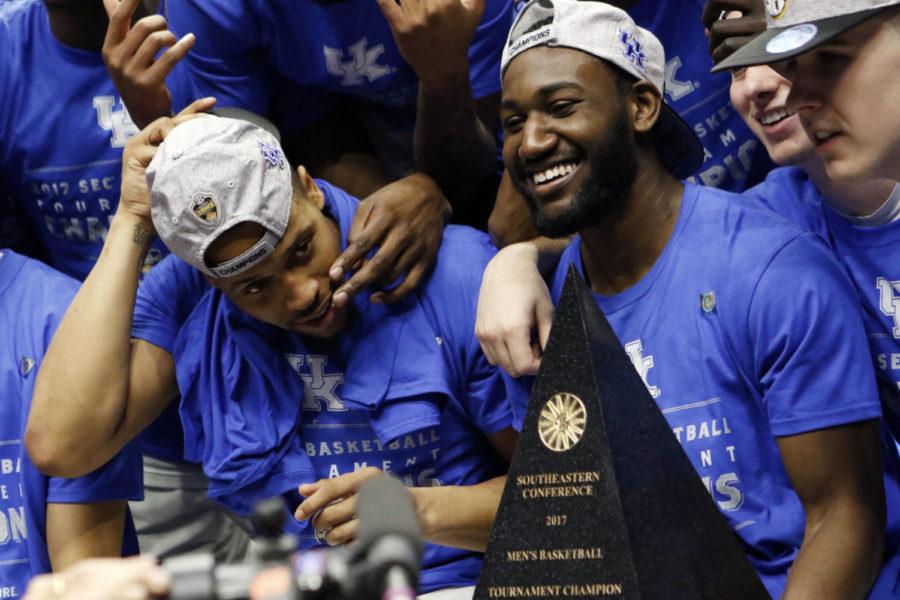 Senior guard Dominique Hawkins smiles with the SEC Championship Trophy after the championship game of the SEC Tournament against the Arkansas Razorbacks on Sunday, March 12, 2017 in Nashville, Ky. Kentucky won the game 82-65 to win their third-straight SEC Championship.

NASHVILLE, Tenn. – For the first time since 1997-99, UK basketball has won three straight SEC Tournament titles after an 82-65 victory over the Arkansas Razorbacks. It is also UK’s 30th Tournament title overall and the win is this team’s 11th in a row.

The margin of victory for the Cats began taking shape at an unlikely time in which both Malik Monk and eventual tournament MVP De’Aaron Fox on the bench. Without Monk and Fox, it paved the way for Dominique Hawkins to leave his mark in his final SEC game.

In UK’s previous two games, Hawkins provided an instant boost of energy off the bench but was held to just 12 points total. However, the spark Hawkins provided defensively came with some offense on Sunday afternoon as the senior poured in nine first half points.

And even with the freshmen on the bench, it was not just Hawkins, but all the seniors that contributed in every aspect of the game to help the Cats create separation in the last quarter of the first half after the Razorbacks got within one.

The first half saw UK’s final 11 points come from non-freshmen and the final nine come courtesy of Hawkins, Derek Willis and Mychal Mulder each hitting a three to help give the Cats a 42-30 lead into the locker room.

In the second half, the Cats had things in control for pretty much the entire half, leading by double digits, and as much as 19, for all but ten seconds of the final 20 minutes in route to closing the game out, but not without the game getting chippy.

Arkansas continued to be a pest for UK and some fouls towards the end resulted in an ejection of Moses Kingsley for Arkansas, and multiple players chirping at each other. The trash talk however, did not bother UK as they were barely bothered and gave very little attention to the Razorbacks.

Hawkins, Fox, Bam Adebayo and Malik Monk each scored in double-figures with Fox leading all scorers with 18 points, and Hawkins had a career-high 14 points. UK will now await its seeding and NCAA Tournament assignment that will be revealed later on Sunday.