Bam Adebayo picking it up for Tournament time 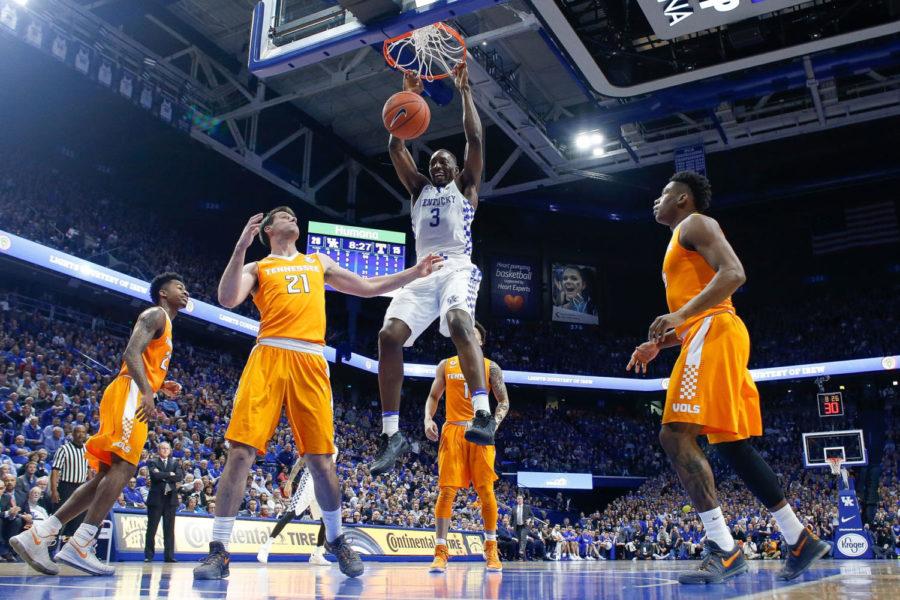 Bam Adebayo is one of the three standout freshman for the No. 9 UK men’s basketball this season. Standing at 6’10” and weighing 260 pounds, Adebayo is a force to be reckoned with on the court.

At this point everyone in the country knows about Malik Monk and his ability to score and get his shot off any time he wants. People are also taking more notice to Monk’s backcourt partner De’Aaron Fox and his quickness getting up and down the floor, but Adebayo’s has been someone that teams have to prep for because of his ability to dominate inside the paint.

So far this season, Adebayo’s numbers don’t stand out as much as some of his teammates but his presence on the floor is something that has been valuable to the Cats. Adebayo has been one of the Cats’ only consistent bigs when it comes to effecting the game down low.

When Adebayo arrived at UK he was labeled as simply a beast, and he struggled to show signs of that type of play early. But he has closed the season strong and strung together some of his best performances.

In recent games his averages have been on the rise, bringing them to 13.3 points per game and 7.6 rebounds per game.

Over the last five games closing out the season Adebayo’s numbers have been high not only scoring a lot of points but also grabbing a lot of rebounds. He played arguably his best two games on the season in back to back games scoring a season high 22 points while grabbing 15 rebounds against Missouri, and another huge game against No. 13 Florida scoring 18 points and grabbing another 15 rebounds. These outings helped earn him the SEC Freshman of the Week honors for two straight weeks.

His ability to score now extends out of the paint as he has started to compliment his thunderous dunks with some smooth jumpers in the midrange game. He’s also given UK another dimension on offense with his ability to pull down offensive rebounds and give UK extra possessions. Possessions that make up for the lack of some transition opportunities that UK got earlier in the season.

In recent weeks John Calipari has run even more offense through Adebayo in sets where he screens for the team’s leading scorer, Malik Monk. This puts opposing defenses in a tough position as both players are deserving of the extra attention and it’s hard to choose to double just one.

This is nothing that Adebayo isn’t used to, as he commended double teams since the beginning of the season. But he is finally getting some breathing room and is starting to make the most of his touches inside.

Teams are starting to have no answer but to foul Adebayo once he gets inside.

“He is getting fouled like crazy when he catches the ball. Like fouled. The last game was worse than this game, this past game,” said Coach Cal in a press conference before the game against Auburn in January. “But, you know – and he is keeping his cool. He never changes anything. By the end of the year, he will be that guy. That is my prediction.”

In these past few weeks, Adebayo is playing his best ball of the season right when it counts looking forward to March. He’s starting to piece together his game, and that just gives UK one more option heading into the postseason.