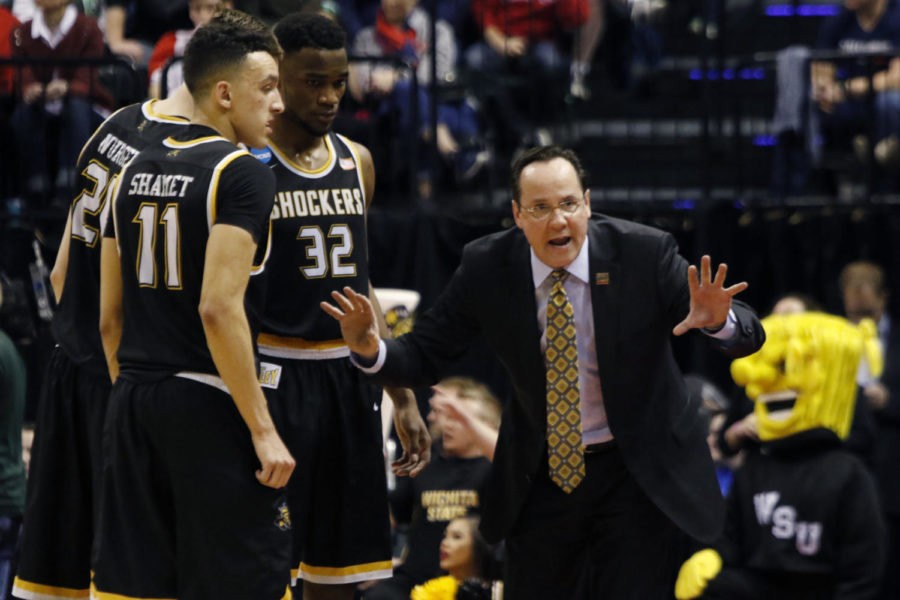 Head coach Gregg Marshall speaks with his team during the first round game of Wichita State vs. Dayton at Baker's Life Fieldhouse on Friday, March 17, 2017 in Indianapolis, In. Wichita State defeated Dayton to advance to the second round 64-58. The Cats will play Wichita State on Sunday.

History has a funny way of repeating itself, and it got some help from the selection committee with this rematch of the 2014 Round of 32 matchup between UK men’s basketball and the Wichita State Shockers. The roles have been flipped, though.

In that game Wichita State was the No. 1 seed and in the midst of an undefeated run before having the bad luck draw of playing the under-seeded No. 8 UK team that was hitting its stride at just the right time. This time No. 2 UK is the higher seed and has the misfortune of playing a 30-win Wichita State team that was unrightfully given a No. 10 seed.

Whatever the circumstances were in that matchup between these two teams, the game turned out to be one of the more exciting tournament games in recent memory. This time around the two teams may not be able to match that one, but it should still be one of the better games this tournament throughout the early rounds. Here’s what to know about the Shockers:

For most mid-major teams, losing two guards to the NBA would mean not expecting much in the next season from the team, especially when those two guards had become so synonymous with the team’s success like Wichita State’s Fred VanVleet and Ron Baker. The Shockers, however, are the exception as they continued to roll this season to their fourth 30-win season in the last four years, fourth consecutive MVC regular season title and sixth straight trip to the NCAA.

Shockers with a bigger win-streak than UK

Coming into the tournament, many praised UK for being one of the hottest teams in the country but the Shockers have right to that claim as well after now rattling off 16-straight wins following the First Round win over Dayton.

Wichita State has been rolling for awhile now, with the team’s last loss coming over tow months ago on Jan. 14 to Illinois State. The Shockers have also been winning big during the streak as they have won by 15 or more points in 14 of the 16 wins, playing right into Wichita State ranking second in the nation in scoring margin (19.6).

It’s also worth noting that the Shocker’s current win-streak is the team longest since 2013-14 when the team started the season going undefeated in its first 35 games. That streak was halted in the NCAA Tournament by UK in the matchup mentioned above.

WSU struggled from the floor in First Round win

Once the postseason starts, all that matters is winning so that teams can survive and advance. With that being said, Wichita State’s performance against Dayton on Friday was not the prettiest of wins. The Shockers prevailed 64-58 over the Flyers, but shot 40 percent from the field and coughed the ball up 16 times in the process.

Wichita entered the game ranked fourth in the country in three-point percentage (40.8 percent), but only shot 6-for-20 against Dayton (30 percent). Landry Shamet led Wichita State with 13 points and three assists. Zach Brown was the lone bright spot for the team shooting-wise, going a perfect 3-for-3 on three-pointers and finishing with 12 points.

Even with the shots not falling, the Shockers still had their normal edge on the glass which helped them remain in control of the game. Wichita ranks fifth nationally in rebounding margin (8.9) and more than doubled that in the game against the Flyer, outrebounding them 48-29.

Besides the rebounding, defense also led the way to the First Round win. Wichita held Dayton to a season low in points (58) and field goal percentage (31 percent).

In its NCAA tournament history, Wichita State is 3-0 against No. 2 seeds, with wins over No. 2 Tennessee in the Second Round in 2006, No. 2 Ohio State in the Elite Eight in 2013 and No. 2 Kansas in the Round of 32 in 2015.With the loss of the team’s two stars in VanVleet and Baker, the rotation this season has been very experimental this season. Through all the tinkering by Marshall, only one player has started every single game this season for the Shockers — Landry Shamet. The freshman point guard has been a constant for Wichita State. He entered the tournament ranked ninth nationally in assist-to-turnover ratio and also led the league in three made (41) and three-point percentage (.506).The Second Round matchup between UK and Wichita State will be a top-five matchup according to Kenpom.com. UK is ranked fourth and the Shockers follow right behind at fifth. Wichita State is one of four teams ranked inside the top-15 in Kenpom’s adjusted offense and defense categories, but also have the second worst strength of schedule in the top-ten, with its schedule being ranked higher than only No. 1-ranked Gonzaga.