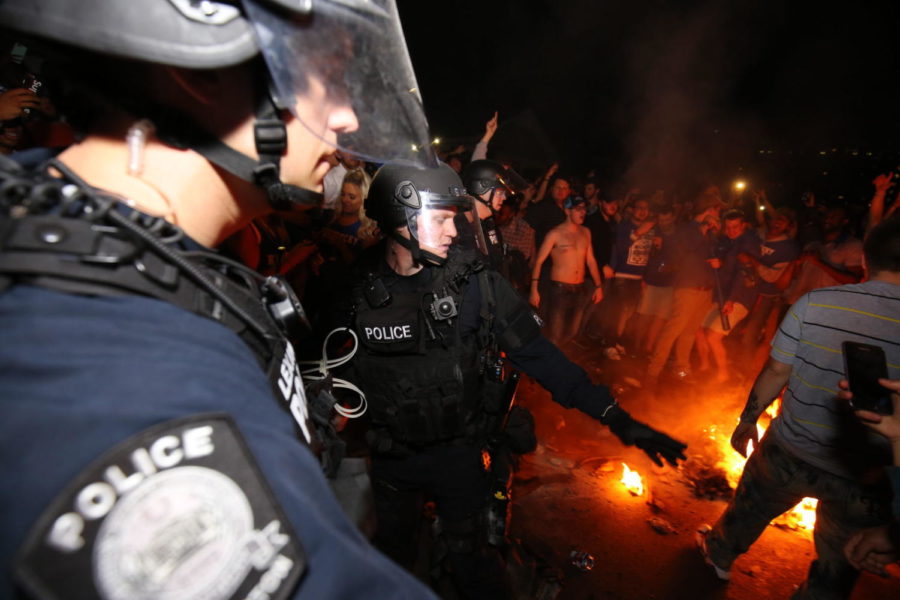 During a celebration of the Kentucky Wildcats' 86-75 Sweet Sixteen victory over UCLA, police move in to distinguish a fire on State Street in Lexington, Ky., on Saturday, March 25, 2017. Kentucky will play the University of North Carolina in the Elite Eight on Sunday.

Two days later, elation turned into sorrow when the UNC Chapel-Hill beat the Cats, ruining their bid for the Final Four.

During the celebrations fans were seen setting a number of small objects on fire, including shirts, beer boxes and paper. Once fires began, small teams of Lexington Police equipped in riot gear were ready to put them out and make sure those among the crowd were safe. Couches were spared, and chants of “C-A-T-S Cats Cats Cats” echoed up and down State Street.

McKenna Riemer, a pre-physical therapy junior, described her feelings of excitement over the victory with the worry of property damage. Her home is nearby on Conn Terrace.

“The crowd was a lot of fun after the game, and it got me even more hyped after the win,” Riemer said. “People were lighting things on fire, but the police were right there to put it out and make sure everyone was safe. They were letting people have all the fun without letting it get out of hand.”

She was hoping to win tickets to the Final Four through UK’s student lottery, and if she did she was planning a road trip to Phoenix with her friends.

“It’s exceeding all of my expectations —  it’s out of this world,” Death said.

UNC’s victory means that South Carolina, the last SEC team in the tournament, will play the University of Oregon in the Final Four.