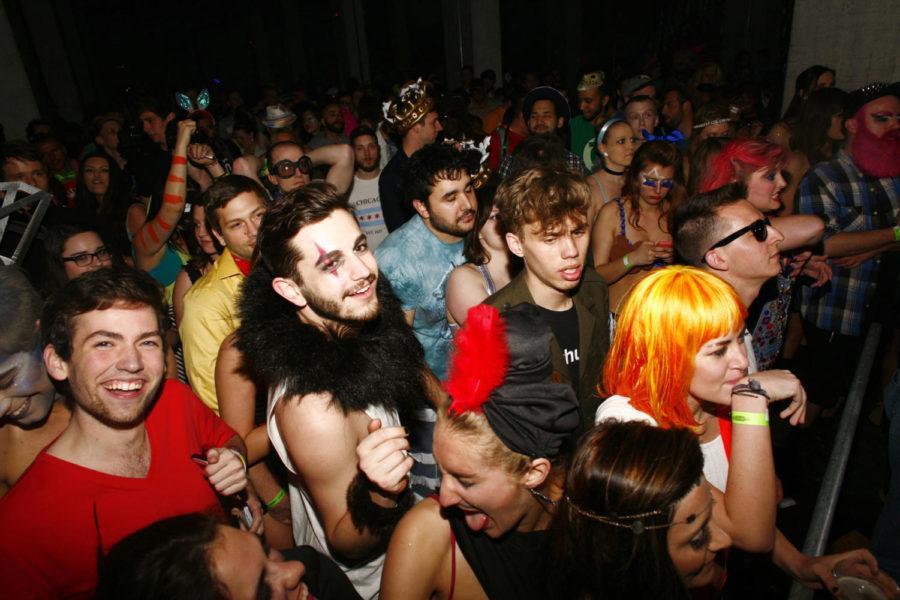 Beaux Arts Ball attendees enjoy the sounds and visuals of the show during the Beaux Arts Ball at the Pepper Warehouse on Saturday, April 11, 2015 in Lexington, Ky. Photo by Adam Pennavaria | Staff

The Beaux Arts Foundation’s annual Spring Ball will be taking place this Saturday, April 8, with more than 300 crazy-costumed guests expected to pack The Burl for the annual concert.

The Beaux Arts Foundation is a student-run organization founded in UK’s School of Architecture in 1969. In 2012, the foundation donated $45,000 to local charities and has remained a student-run nonprofit throughout its 48-year existence. Proceeds from this year’s show will benefit the non-profit arts organization Institute 193 along with the UK College of Design scholarship fund.

The Spring Ball has become a staple of Lexington nightlife with hundreds of dedicated attendees and past attendance counts surpassing 1,500. Past events have included large-scale art installations from students within the college of design that are often incorporated as part of the dance floor. The installations, as well as the festive and often provocative costumes of attendees, are a large part of what gives the event its unique feel.

When asked about the location and layout of this year’s show, Executive Director Tara Prasad said she is excited to be hosting the event at The Burl and “using the surrounding warehouse for installations and live art.”

“We’re excited for a smaller venue that will intensify the experience” Prasad said.

Including the outdoor stage, surrounding warehouse and parking lot there is space for an estimated 1,200 attendees. Prasad was confident about attendance for this weekend’s event, citing respectable online ticket sales and Lexington concert-goer’s tendency to purchase the day before or night of the event.

Past events have featured headlining artists such as Diplo and Flosstradamus with a heavy focus on incorporating local acts in supporting roles. This year’s lineup is no exception, featuring headliner Luca Lush out of New York. Trap-heavy remixes of popular songs, like Migos “Bad and Boujee” and Travis Scott’s “Antidote” have earned Lush over 100,000 followers on Soundcloud and millions of streams on Spotify.

Other artists performing include local house legend Ellie Herring, who has maintained a heavy local presence performing alongside other Lexington-based artists like Coughinz, who will also be making an appearance. Local rapper Nemo Achida will be performing with his historically large supporting cast. Local electronic artist Fleece and Appalachian bass artist Lancelott have both performed at previous Beaux Arts events and will appear again. Electronic duo Echo Mecca will be making the trip down from Ohio to round out the list.

The Spring Ball is much more than just a concert and will incorporate a wide variety of art and entertainment. According to Hannah Daniel of Calypso Flow Performance Arts, the event will include go-go artists, flow dancers, aerialists, and a pointe dancer.

The Lexington Fashion Collaborative will once again host a fashion and drag show leading up to the main musical acts of the night. Live graffiti artists will be tagging a portion of a semi-truck throughout the event in addition to live wood burning and glass blowing. North Lime Coffee & Donuts and Sav’s Chill will be on site to satisfy late night cravings while the Bulleit Distillery and West Sixth Brewing provide beverages in addition to The Burl’s own bar. Local clothing store Work + Shop and Homegrown collectives will be doing pop-up shops as well.