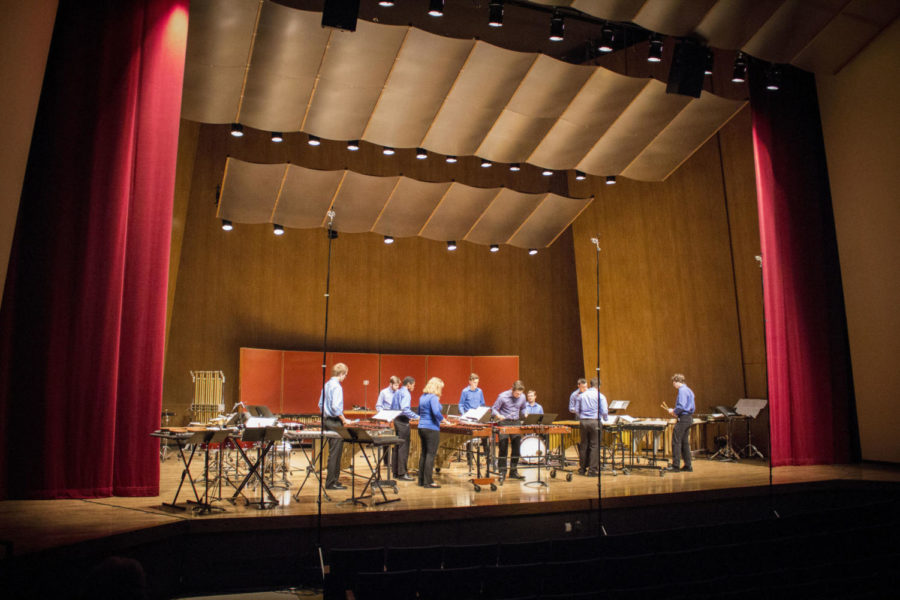 The audience of the 2017 Spring UK Percussion Ensemble concert on Sunday afternoon was witness to a special event – the world premiere of a piece composed by a student.

The concert was a mixture of modern percussion music influenced by various sources, from Brian Blume’s “Scene from the Woods” to Alejandro Viñao’s “Tristano Tocato” based on a riff by jazz pianist Lennie Tristano. But the last piece was inspired by something multidimensional – the tesseract, or hypercube.

“Especially from a young age I was always interested in space and science, and eventually I just started getting into watching shows like Carl Sagan’s ‘Cosmos,’” Perez said. “That’s really intriguing to me and I think a lot of those concepts of physics and theories really fascinate me. I thought that would be a way to kind of emulate what the music was doing in that piece.”

Perez originally wrote the two-instrument piece written for a friend in about a week over Christmas break in 2015. He later expanded it to be played on an ensemble of two marimbas, three vibraphones, a set of crotales, two bells, tibetan bowls, a xylophone and a chime – eleven instruments in total.

It’s customary for UK Music students to perform original pieces at these concerts. For Perez, his original composition was an opportunity to explore between “the multiple aural ‘dimensions’” unique to percussion instruments.

“The thing with percussion is that we can’t sustain, we can’t truly sustain, so I think the rhythms really fascinate me and with everything coalescing… almost even a [scientific] reflection with shooting stars going off in the distance,” Perez said.

After the music swelled and ended with a emphatic “ding,” Perez was given a standing ovation by the audience.

“It’s always a pleasure to hear my music played live, especially when I’ve been just working through it on paper and hearing it in my head. It’s nice to see it manifest into a live version like this… to see it open up with live players,” Perez said.