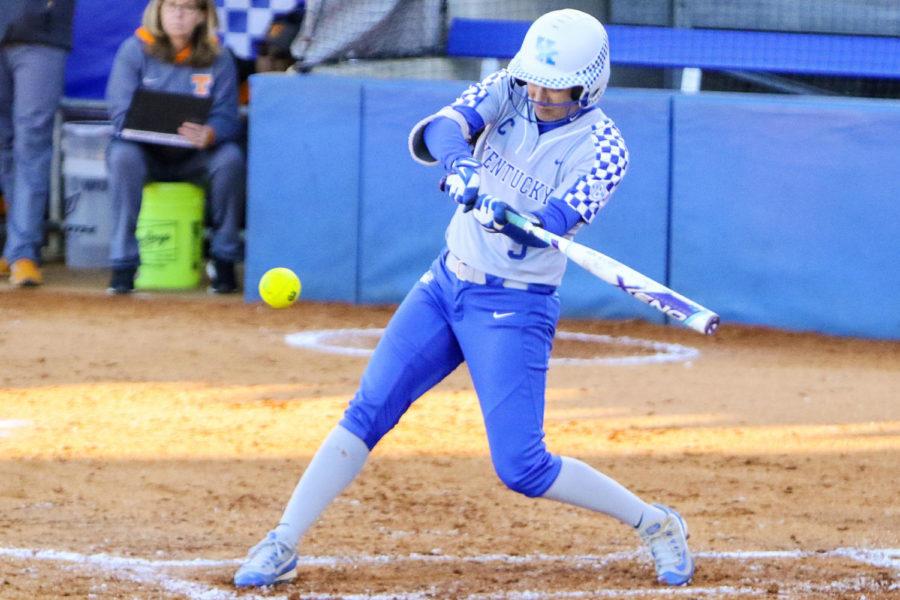 Kentucky Wildcats right fielder Breanne Ray hits a single during the second inning of the game against the Tennessee Volunteers at John Cropp Stadium on Friday, April 7, 2017 in Lexington, KY. Photo by Addison Coffey | Staff.

Following a devastating series against SEC opponent Tennessee, where the UK softball team was swept, the Cats traveled to Louisville Wednesday to take on their in-state rival. The Cats obviously took out some degree of frustration on the lesser-composed Cardinals, as they ran up the score, 10-1 in six innings.

From the very beginning, UK made sure to assert themselves as the dominant team, as they took a 6-0 lead before the end of the third inning. Pitcher Erin Rethlake netted two RBI during this scoring run.

No team would score again until the fifth inning, when Louisville scored a run on a double by catcher Jenna Jordan. The Cardinals wouldn’t score again all game, as the Cats took the sixth inning for themselves, helped along by a three-RBI play by Breanne Ray. This gives Ray 20 RBI on the season, moving her to second on the team, only behind the homerun-prone Abbey Cheek.

Cheek had a good day at the plate herself, getting two hits in her three at-bats, scoring one run and netting one RBI.

Seasoned pitcher Meagan Prince also seemed to take the series against Tennessee as a challenge for this game, as she had more strikeouts than hits allowed, netting a third of the team’s 18 outs, becoming a defensive powerhouse all on her own.

The most interesting part of the game, perhaps, was that the Cats scored 10 runs without ever getting the batter past second base on a hit. There were no homeruns or triples hit the entire game for the Cats, but UK still managed to get their runs with efficient batting and base-running.

The “timely hits” that head coach Rachel Lawson wanted in the Tennessee series finally came to the Cats during one of the most important games of the year, and they will need that consistency to continue as they host a brutal Florida team for their series that begins on April 14.