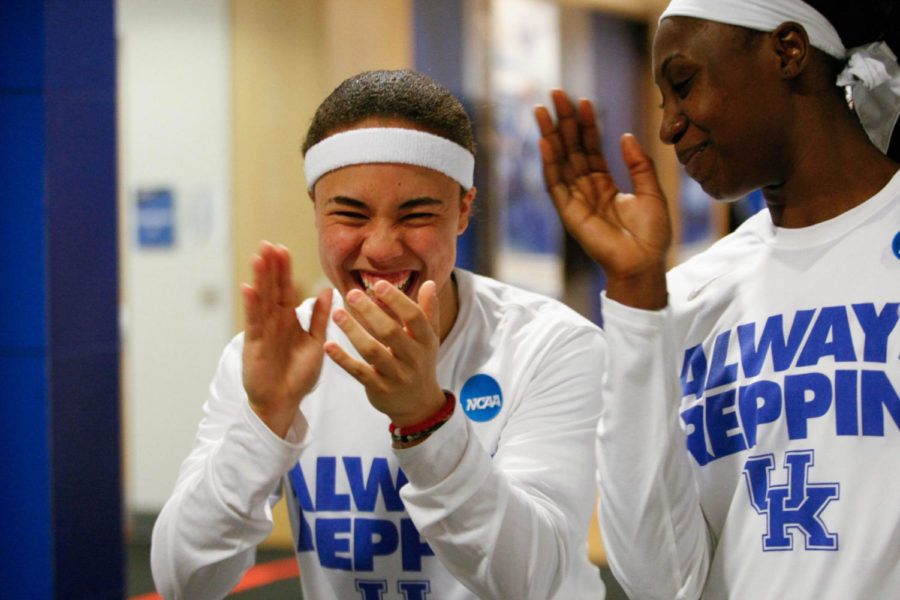 Guard Makayla Epps and forward Evelyn Akhator laugh in the tunnel prior to the game against the Oklahoma Sooners on Monday, March 21, 2016 in Lexington, Ky. Photo by Hunter Mitchell | Staff

For the first time in school history, the UK women’s basketball team had two players picked in the same WNBA draft. Evelyn Akhator was selected third overall by the Dallas Wings, while Makayla Epps was selected 30 picks later by the Chicago Sky

Akhator’s third overall selection was historic, because it is the highest a UK women’s player has been picked in the draft ever. The highest a UK player was picked before Akhator was tenth, when A’dia Mathies was drafted by the Los Angeles Sparks in the 2013 draft.

The forward from Lagos, Nigeria fills a big need for the Wings, as Dallas was in need of a player who could control the post. Akhator averaged a double-double throughout her entire senior season, finishing with 18 double-doubles.

Akhator became the third player in program history to be selected in the first round, joining Mathies, and Victoria Dunlap, who was selected eleventh overall in the 2011 draft.

Epps slid down the draft board further than most were expecting, as the star guard was not picked until the third round (33rd overall), when she was selected by the Sky.

Chicago likely got a steal that late in the draft, as Epps is one of the best players to wear a UK jersey. She moved into the top-five in most career points in UK history this season, finishing with a career 1,790 points.

Akhator and Epps became the fifth and sixth players drafted in program history. This was also the first time the Cats had a pair of draft picks in the same draft, as previous UK draft picks were selected in separate drafts.

Epps and Akhator will make their WNBA debuts in just over a month after some preseason games, as Akhator’s Wings will take on the Phoenix Mercury on May 14, while Epps and the Sky will play the Minnesota Lynx on the same day.