Cats stay consistent in midweeks, grind out win over Xavier 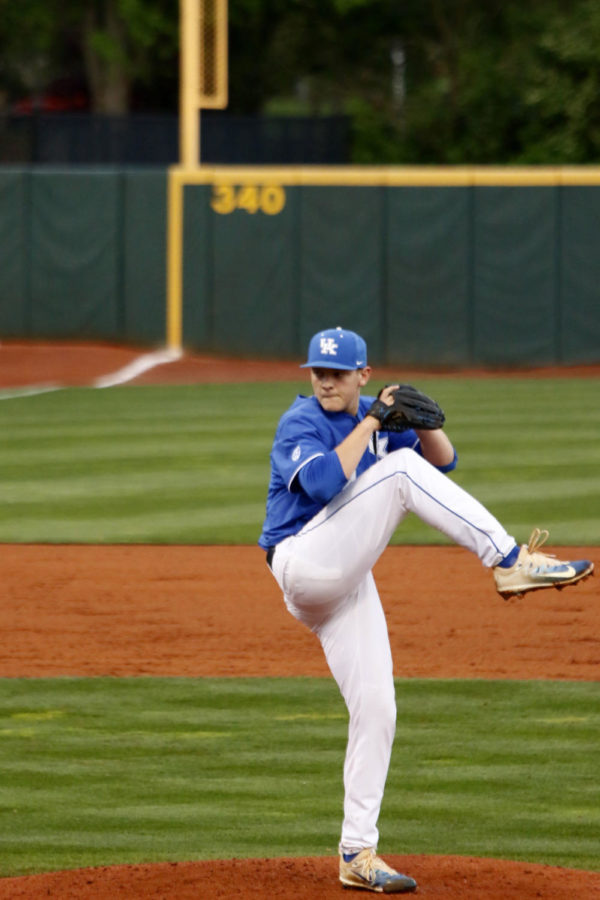 Pitcher Zack Thompson winds up during the game against the Louisville Cardinals on Tuesday, April 18, 2017 in Lexington, Ky. Kentucky defeated Louisville 11-7.

No. 6 UK baseball took care of a scrappy Xavier team on Wednesday night at Cliff Hagan Stadium by a final score of 6-0. It was a win that was impressive mainly because the Cats’ offense did not exactly wake up until the seventh inning.

Up 1-0 and with just four hits, the UK offense gave its bullpen some breathing room with a five-run barrage behind an Evan White two-RBI double, a Zach Reks RBI single and a Kole Cottam two-run home run. It is the third straight game that Cottam has homered in, which made him the first player since Golden Spikes winner A.J. Reed in 2014 to accomplish that feat.

Freshman left hander Zack Thompson gave UK yet another quality start on Wednesday with what was his second-best outing of the year. Thompson threw six shutout innings allowing just one hit while striking out five on just 86 total pitches to bring his ERA down to 4.18 for the year.

It has been evident, especially over his last three starts that Thompson has improved in multiple areas but most noticeably his command. Not only that, but for a true freshman starting pivotal mid-week matchups confidence is key and is something that can only be built up over time.

“Absolutely I am more confident,” Thompson said. “I got in that little skid there where I was struggling to get out of the third inning and it starts taking a toll on you and you start thinking about it. Just sticking to the plan helps you get out of it, and it helps when you can go five or six shutout innings.”

Thompson’s newly found confidence over this last month however has clearly been in the DNA of this team since the start of the year and it is contagious.

However, over confidence can be deadly especially when the Cats are constantly moving up the rankings and have now put themselves in position for a national seed come tournament time. With all this attention being brought to the program, it would be easy for this UK team lose focus, but coach Nick Mingione has been proud of the way his guys have stayed the course.

“Coach Roland Fanning and coach Todd Guilliams both really harped on (not many midweek games) today,” Mingione said. “They spent a lot of time talking about how we are not doing that and that we have earned everything we have gotten so far and that we don’t have let downs. Other teams have let downs.”

Avoiding those letdowns has what has helped the Cats attain their top-10 ranking as well as explode on the scene nationally. UK will now look to continue to make their presence felt and keep winning games in the SEC this upcoming weekend against South Carolina in Colombia beginning on Friday.