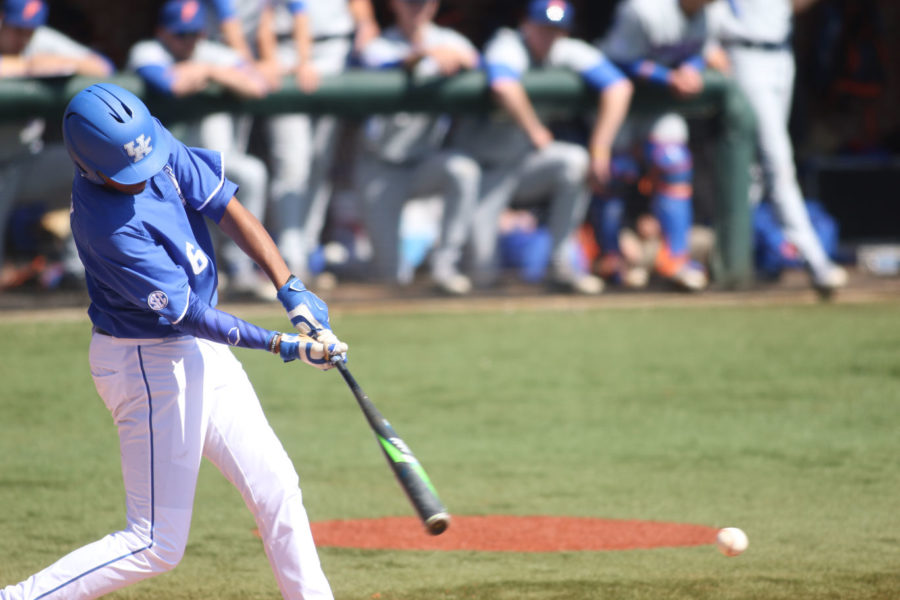 Tristan Pompey swings low for a breaking ball during the game against the Florida Gators Cliff Hagan Stadium in Lexington, Kentucky on Saturday, March 26, 2016.

No. 10 UK baseball picked up two big wins this weekend at Missouri to win their fourth SEC series of the season. The victories on Friday and Sunday for the Cats may have been the team’s most important wins so far this year.

Following its second series loss the year last weekend at scalding hot Mississippi State, a road SEC series win is just what UK wanted to see, especially with the schedule that lies ahead.

The series victory would not have been possible however, if it were not for sophomore outfielder Tristan Pompey. Pompey was a nightmare for Tigers pitching, finishing the weekend 8-12 with a double, two home runs and three RBI; he is now 17-27 (.630) in his last seven games.

In game one of the series Friday, Pompey’s fellow sophomore Sean Hejlle out-dueled top pitching prospect Tanner Houck to help lead the Cats to a 5-2 victory. Hjelle fired seven shutout innings with eight strikeouts and allowing just five hits to pick up his fifth win of the year.

Against Houck on Friday, UK capitalized on almost all its opportunities regardless of what they were with only two of its runs being charged as earned runs, but nonetheless they came away with the win in game one.

Game two on Saturday was virtually a in-game home run derby between the two teams, with the Cats and Tigers combining for nine home runs, seven of which came from just three players. Mizzou’s Trey Harris hit three of the home runs, his teammate Brett Bond sent two over the wall, and Pompey had the other two homers for UK.

Saturday’s game was not exactly a pitcher’s duel and UK starter Zach Logue struggled for the second straight week, allowing seven runs over 5.1 innings of work. When it was all said and done, the Tigers had sent home nine runs which was just enough, as a UK comeback fell short.

Heading into the rubber game on Sunday, it was no secret that it was an important one in the SEC East standings.

Fortunately for the Cats, starter Justin Lewis delivered a gutsy performance and despite being under the weather, Lewis fired five innings, allowing three hits and just one run in route to picking up the win. UK gave Lewis a 2-0 lead to work with in the fourth and that is all that he, and the bullpen needed on Sunday.

Marcus Carson had the biggest hit of the day, a two-out single with the bases loaded that broke the game open and gave the Cats a 6-1 lead. Riley Mahan, Luke Becker and Troy Squires each contributed an RBI that led to UK’s victory.

Up next for UK is perhaps the toughest week a team in the NCAA will face all season. On Tuesday, the Cats will host No. 2 Louisville and then welcome No. 9 LSU to Lexington for a weekend series. Regardless of what lies ahead, halfway through SEC play, UK has a two-game lead in the SEC East and is off to a 10-5 start in SEC play, the second-best start in program history.