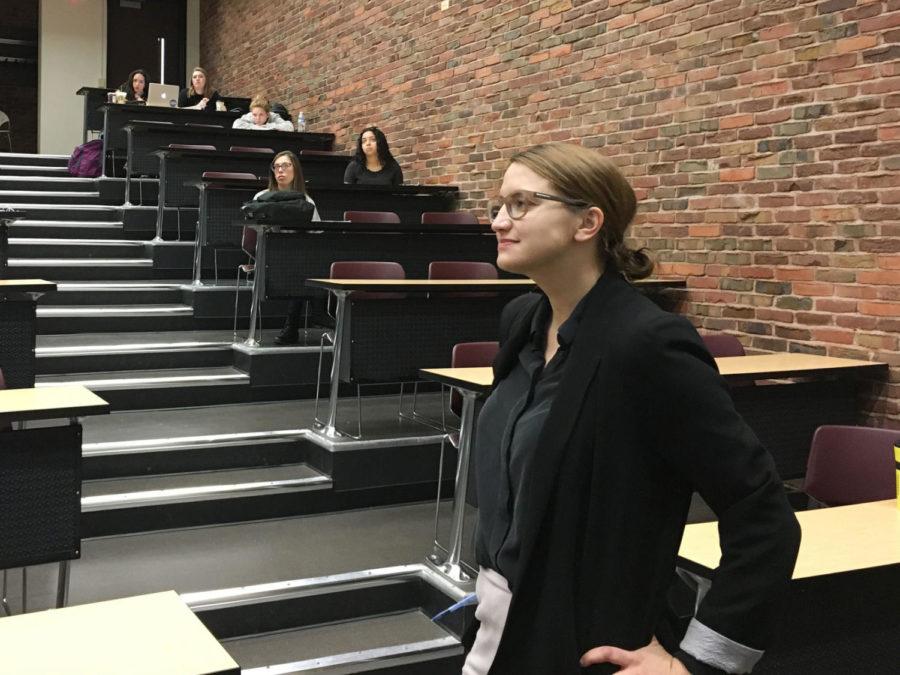 Hamburg-based television, radio and online reporter for German Public Broadcasting (NDR/ARD) Mareike Aden spoke to UK journalism classes earlier in the week about her journey from Germany to Russia and throughout the West covering national and international politics.

At 33-years-old, Aden has already lived in over three countries and speaks several different languages. Traveling the countries alone, she sends her podcasts to Hamburg by creating a make-shift studio in her various hotel rooms, sometimes covering her entire body under a blanket to reduce the echo and recording her updates from the week.

Aden is currently in the U.S. researching President Donald Trump’s electoral victory and the degree of satisfaction among his voters in the early stages of his presidency. She received the Transatlantic Media Fellowship, which is helping her complete her study.

She has been visiting the various states that have been known to flip between democratic and republican majorities during election seasons. Her next stop in the U.S. is Youngstown, Ohio and Erie County, Pennsylvania.

“I really wanted to go to a swing state because I feel that whenever I am in Washington, D.C. or New York City that I am kind of in these bubbles, and you would very rarely find anyone who voted for Donald Trump,” Aden said.

Aden said her biggest observation so far has been that Trump managed to win votes from various types of people who come from all different backgrounds and who all had varying reasons for voting for him.

“These people in real life would have a lot to argue about life, but then, he’s managed to cater to their opinions or to what they find important,” she said.

Aden said there are various groups of people from different social classes that voted for Trump, and she thinks it is pertinent to her research to travel to smaller cities around the country to gain insight.

“I want to speak with blue-collar workers there as to why they feel betrayed by the Democratic party, why they voted for Trump, and really get to know how they feel now,” she said.

Aden covered the Brexit referendum and the aftermath in London. Shortly after, she flew to the U.S. and reported on the presidential election campaigns as part of an Arthur F. Burns Fellowship.