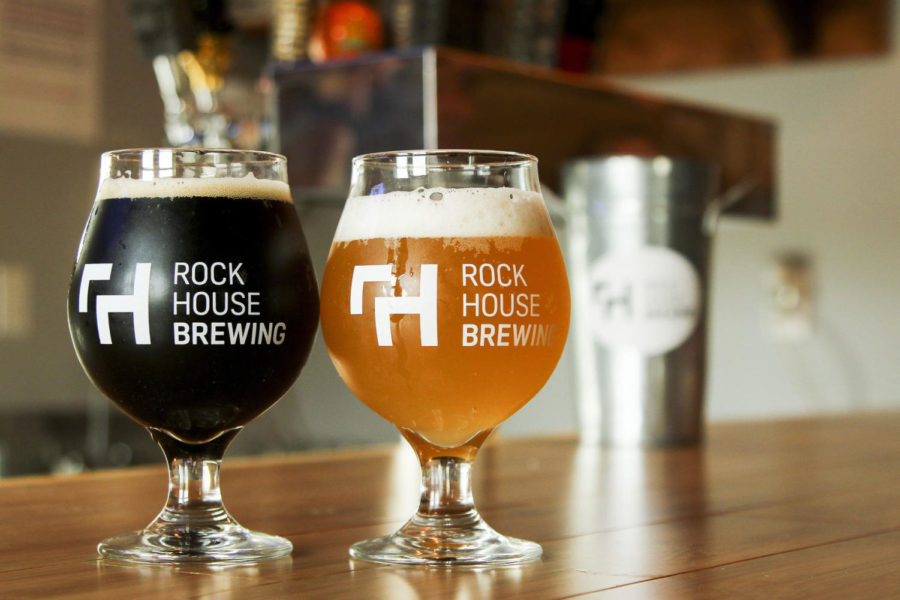 Rock House Brewing is a new brewery in Lexington located off North Limestone.

Rock House Brewery opened in the North Limestone district this past December.

The bar is co-owned by Kevin Richey, William Hacker, Danny Hadad, and Merna and John Brown.

“My husband and Kevin were in the Brewers of Central Kentucky club,” Merna Brown said. “They used to homebrew together, and had this passion to explore further and showcase their talents to the community and to Lexington.”

Richey and John Brown had the idea for the brewery, and were joined later by Hacker and Hadad.

Merna Brown works on human relations, payroll and social media for the brewery. She is also an administrative staff officer in UK’s Residence Life department.

According to Merna Brown, the brewery often brings in food trucks, allowing their customers to please their palates with food from Gastro Gnomes, The Epic Cure and Hogfathers BBQ and others while swigging down a signature Rock House brew.

In the few months since its opening, Rock House has hosted a wedding and rehearsal dinner, live music every Thursday, a monthly charity night, open mic night and ministry by Faith on Tap. John Brown alluded to more creative events in the future, including an upcoming event that will pair craft beer and dessert on May 21. The brewery also plans to host a car show and home brewing competition.

“We’ve got a beer and cupcake pairing that we’re going to do where a local baker is going to use five of our beers to make cupcakes,” John Brown said. “Then we’re going to pair them with the beer that she made them with.”

John Brown says the Groupie Cream Ale is the most popular brew. It is a lighter cream ale and is often referred to as a pre-prohibitionesque ale. It has more body and flavor than usual mass-produced lagers, but can be compared to an ale version of it. After prohibition people began brewing lighter, easy drinking beers.

Other beers include the Double Kick Drum, a double IPA loaded full of hops, and the Rye It Out, a red rye IPA that contains lower alcohol.

Uncle Johns Brown is a brown ale brewed with hemp seeds sourced from Victory Hemp Foods, a local business. The beer was created because the owners wanted to brew a beer with hemp food.

The building that houses Rock House Brewery was built in the 1920s and was originally an office for the Lexington quarry. A rail came through the building that rocks would be loaded onto to weigh.

“Our name, it’s a double entendre. It’s rock because we’ve got a stone building, and rock because we like music too,” John Brown said. “We like to have musical access here. Some of our beers’ names are musically themed, but others are rock and mineral themed.”

Rock House Brewery is located at 119 Luigart Ct. and is open from 4-10 p.m. Monday through Friday, 11 a.m. to midnight on Saturdays and from noon to 8 p.m. on Sundays.