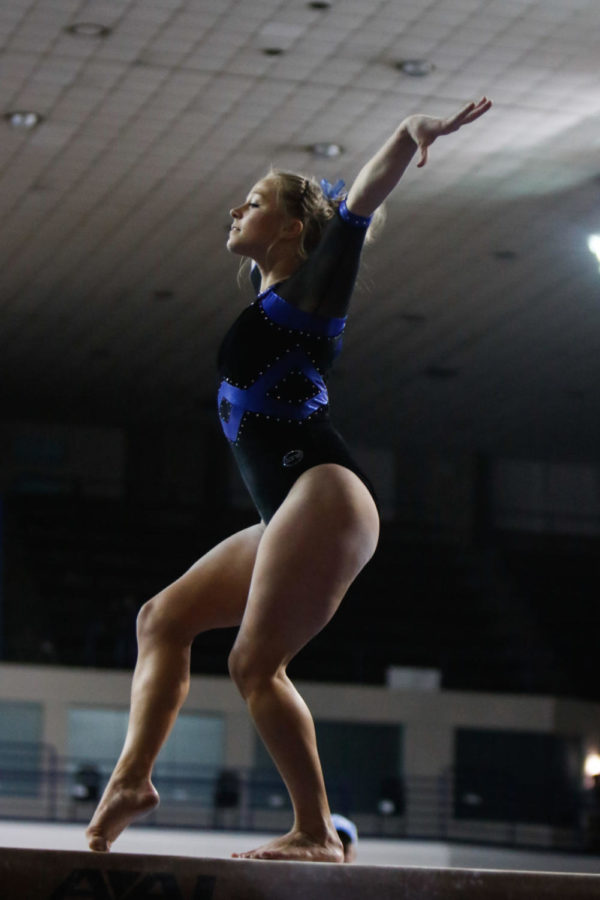 Freshman Mollie Korth performs on the beam during the meet against Alabama on February 10, 2017. Photo by Arden Barnes | Staff

UK gymnastics was looking to qualify for the NCAA National Championships as a team for the first time ever, but fell just short at the NCAA Seattle Regional competition on April 1.

Despite the disappointing team finish, the Cats will still send two gymnasts to St. Louis, as freshman Mollie Korth and Sophomore Alex Hyland qualified for the national championships in the all-around event.

Korth and Hyland both finished with scores of 39.3 in the all-around event, tying for fourth place and trailing regional champion Maggie Nicholls by .450 points.

Korth’s best event in the competition was the vault, where she earned sixth-place with a score of 9.875 Korth also posted a 9.850 in the beam, which tied for seventh-place.

Hyland will be the other UK gymnast representing the Cats at the national championships along with Korth. Hyland’s best finish at the regional competition was the beam, where she finished in a tie for third with a score of 9.9.

All four UK gymnasts competing in the all-around event finished with a score of over 39 points. Katie Stuart would finish in seventh place, and Sidney Dukes finished in a tie for eighth place.

The Cats’ goal going into the regional competition was to qualify as a team for the NCAA Championships. Despite not achieving that goal, the future is bright for the Cats as all four all-around event finishers are sophomores or younger. The Cats also posted the top-four scores in program history throughout the course of the season.

Korth and Hyland will start competing in the NCAA National Championships on April 14 at 8 p.m..