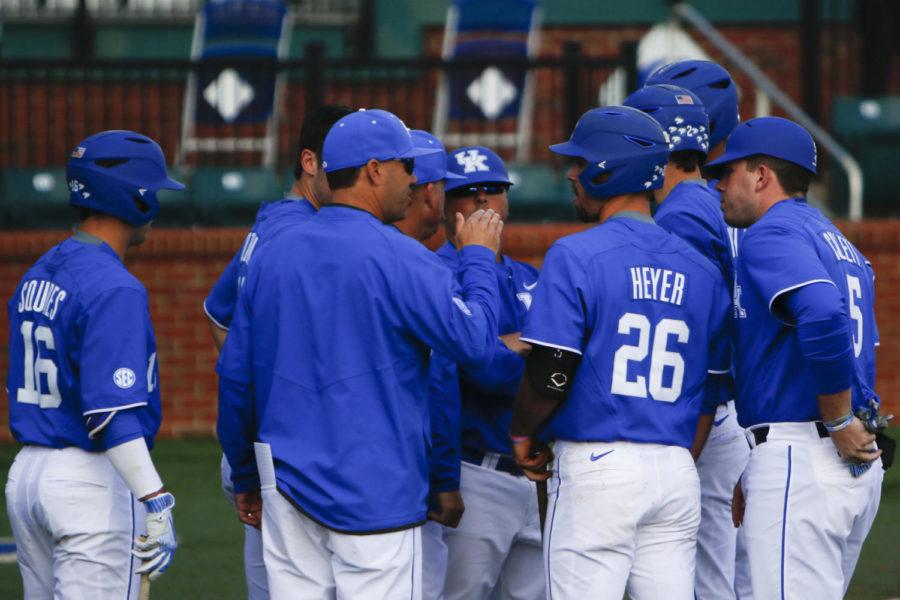 Head Coach Nick Mingione talks to his team during a WKU mound meeting during a game against the Western Kentucky Hilltoppers on Wednesday, March 1, 2017 in Lexington, Ky. Photo by Carter Gossett | Staff

No. 4 UK baseball opened up their series against the Georgia Bulldogs on Friday afternoon, but was upset in the series opener as the Cats fell short to Georgia with a 5-3 loss.

The Cats are now 14-8 in SEC play as they face the Bulldogs again on Saturday and Sunday. The Cats are hoping to take another SEC series to fuel their momentum going into postseason play.

After a scoreless four innings, the Bulldogs scored one run to open up the fifth inning, but the Cats’ offense came through in the bottom of the fifth when Evan White hit a two-out single which scored Tyler Marshall to tie the game at 1-1.

In the bottom of the 8th, the Cats loaded the bases when Zach Reks singled, Riley Mahan was intentionally walked, and Troy Squires got to base on balls. Marshall then hit a sacrifice fly to bring in Reks to take a 2-1 lead.

In the top of the ninth, only needing one more out to win the first game of the series, Georgia took a 3-2 lead with two outs on a double and an error by UK. After a fly ball was dropped in the outfield on a later at-bat, two more runs were scored by the Bulldogs to extend their lead 5-2.

In the bottom the ninth, UK loaded the bases yet again off a Connor Heady double and Tristan Pompey single. Then Reks and Luke Becker reached base by being walked, which brought Heady in to score. This would be the last run scored by the Cats, as UK came up just short in their comeback attempt.

Sophomore right-hander Sean Hjelle, had another quality start, only giving up one run after 7 2/3 innings pitched while striking out seven batters. Hjelle’s ERA is now 3.29.

Logan Salow replaced Hjelle in the 7th inning and recorded three strikeouts but allowed the four runs that came in the top of the ninth.

Hjelle has been a major key in UK’s rotation and has played a significant role in their success thus far. Although Hjelle has been so successful, he says that the focus should be on each game and not on the postseason.

Commenting on his 7-2 record and getting closer to the playoffs, Hjelle said, “It just means that I’m getting my job done and what I need to do for my team and it’s really my only job to just keep my team in a position to win, so it’s good, but not something to focus on.”

It is important that the Cats stay strong as the No. 1 team in the SEC East, especially as they near postseason play. They will need to pull a series win versus Georgia this weekend, to improve their record and continue to lead the conference.