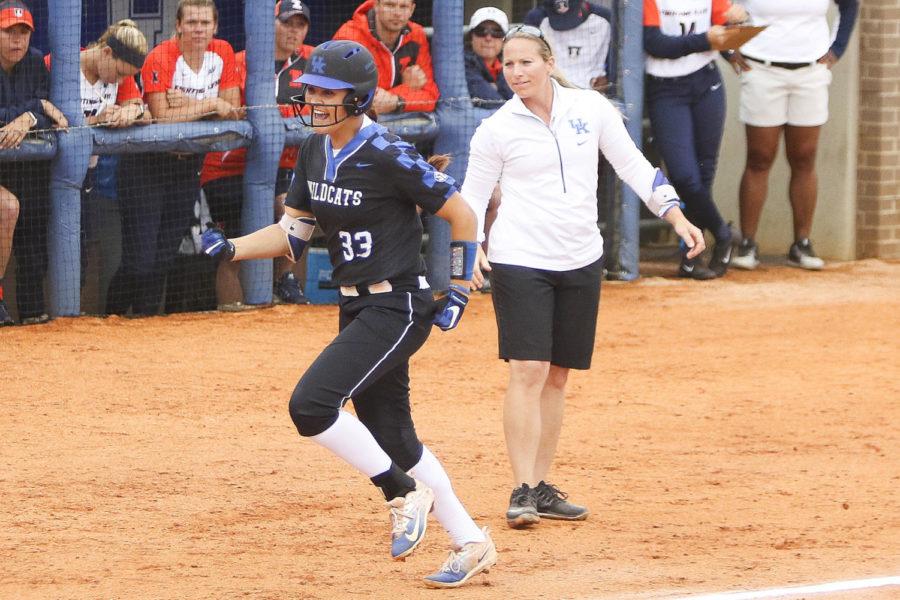 Kentucky Wildcats second baseman Alex Martens celebrates rounding third after hitting a home run in the first inning of the championship game of the Lexington Regional at John Cropp Stadium on Sunday, May 21, 2017 in Lexington, KY. Photo by Addison Coffey | Staff.

After a 4-2 victory over Illinois on Sunday, the UK softball team is advancing to the Super Regional round of the NCAA Tournament, thanks to contributions from unexpected sources.

Freshman second baseman Alex Martens batted under .300 for the entire 2017 season, but none of that mattered as she proved to be a top-notch offensive powerhouse this weekend.

Over the three-game weekend, Martens batted well against both DePaul and Illinois, racking up five hits, five RBI, two runs and a homer.

“You never kind of anticipate it, but you hope for a good success,” said Martens. “I felt good all week hitting.”

With shutouts against both DePaul and their first bout with Illinois, the Cats’ defense was in top form all weekend. They surrendered two runs in their second victory over Illinois, but outscored opponents by nine runs over the whole weekend.

In the regional final Sunday, the Cats were all business. As the designated away team, they scored three runs in the first inning, including Martens’ two-RBI homerun over center, and pitcher Erin Rethlake only allowed one run in her 5.2 innings pitched.

Martens notched a third RBI by flying out to right field, sending Abbey Cheek to home plate. Cheek had hit a triple the play before, one of UK’s two for the game.

Near the end of the game, Illinois began to generate offense, but it wasn’t enough as the Cats fended them off and preserved the win.

“I think we expected to win today,” said UK head coach Rachel Lawson. “I think we’ve worked hard all year, and I know every team has, but this is something we do. This is Kentucky softball; Super Regionals is not something that is foreign to us.”

Lawson is certainly correct about UK’s familiarity with the Super Regionals, as the Cats have advanced to that round in four of the last five years under Lawson. In 2014, the Cats went all the way to the Women’s College World Series, a feat they hope to accomplish again this year.

Lawson also was emotional in crediting UK’s success to the content of her team’s character, not just their skill on the field.

“There’s a lot of reasons we shouldn’t be here, but the reason we are here is because of who they are, not just how good they are, but who they are,” Lawson said after the game.

UK will now face the victor of the regional final between Oregon and Wisconsin in a weekend series starting Friday at a campus site to be determined.