The Iceland Itinerary: How to See it in 10 Days 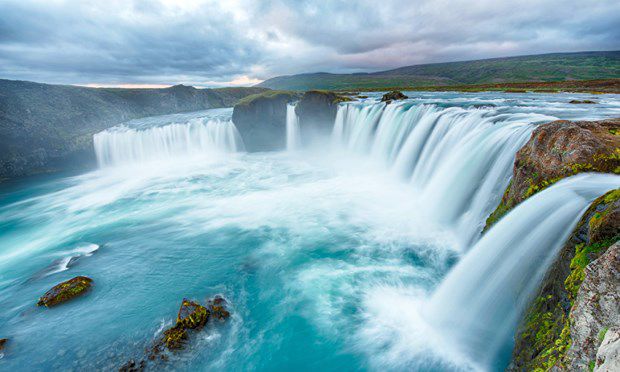 Iceland has been on my bucket list for several years now, but prior to then I wouldn’t have given it a second thought. Renowned for it’s natural beauty, rich history, and wild landscapes Iceland is a small country to the southeast of Greenland between the North Atlantic and the Norwegian Sea. While the name “Iceland” would make you think that it is a frigid, icy, and desolate location, it is actually the opposite. Temperatures do fall into the low teens and even negatives in the winter, but stay fairly stable and pleasant in the low 60’s in the summer. This is also one of the few places on Earth where Aurora Borealis can be viewed in the winter months when the ground is blanketed in snow.

In the summer however, the snow melts, wildflowers bloom, and the midnight sun appears. With only a couple hours of semi-darkness in the summer, this allows for tourism to begin early and end late! This does cause issues for tourists who planned on seeing beautiful sunsets and sunrises or who planned on viewing a vivid night sky.

Even though some activities will be out of the question during the summer, there are plenty of other warm weather activities that can be planned such as whale watching, bird watching, hiking, and swimming between the tectonic plates. In the summer, over 15 species of whales and dolphins make their way into the Icelandic waters and remain here until the end of summer. Among these are humpbacks, blue, sperm, orca, minke, and harbor porpoise. Summer is also when puffins can be spotted, among a variety of other land and sea birds.

After doing some personal research on the things that someone should see when in Iceland, my personal travel agent at Avant Travel, Linda Eades, and myself came up with a potential itinerary for a trip in July. My trip will be 10 days total, which is an ideal length of time to see this beautiful country, but you can easily extend your trip if you want to see more!

“Journey to the Center of the Earth” tour, which was the inspirational spot of descent in Jules Verne’s adventure storySnaefellsnes peninsula – the western edge of Iceland, which is home to dramatic landscapes, few towns, and pods of killer whalesYtri-Tunga – black sand beaches along the western coast of IcelandArnarstapi village and descent into Vatnshellir Cave – a small coastal town on the western edge of Iceland dramatized by volcanic formations. Vatnshellir cave is characterized by volcanic stalagmites and stalactites and is the entry point to the “center of the earth.”Djúpalónssandur beach and Berserkjahraun Lava Field – the final stop on today’s tour consists of a beach covered in black “pearl” rocks and a surrounding landscape of lava formations.

Pingvellir National Park (Thingvellir) – the site of Iceland’s first Parliament founded in 940 AD among other historical sitesGeyser hot spring – a geothermal area where the gurgling water bursts 25 meters high. The name “geyser” originated in Iceland.Gullfoss waterfall – This magnificent waterfall is also termed the Golden waterfall and has no limit on how close you can get to it! Thunderous cascades of water flow over 3 layers of lava step creating heavy mist at the bottom.Snorkeling/Diving the Silfra Fissure – the fissure that separates Europe and North America which offers over 100 meters of blue, crystal clear visibility. The underwater landscape has a lunar appearance, but you’ll want to get in and get out because the water is going to be quite chilly even with a wetsuit on!

Seljalandsfoss waterfall – One of the most beautiful waterfalls in the south of Iceland. Be sure to bring a rain jacket and walk behind the waterfall in hopes of catching a glimpse of a rainbow! Solheimajokull Glacier – Take a walk on this beautiful blue glacier on an easy 3-4 hour hike!Reynisfjara Black Sand Beach – The most impressive black sand beach in Iceland lined with basalt columns bearing a rainbow hue.Skogafoss waterfall – One of the largest waterfalls in Iceland houses an impressive spray and beautiful rainbows (or doubles if you’re lucky!)Eyjafjallajokull Glacier/Volcano – This beautiful view is a combination of a glacier and a lovely volcano which last erupted in 2010.Hekla Volcano – Known as the “Gateway to Hell,” this massive volcano last erupted in 2000.

Lake Myvatn – This beautiful area is full of bubbling mud holes and geothermal pools surrounded by greenery.Godafoss Waterfall –One of the most stunning panoramic waterfalls in Iceland.Skutustadagigar Pseudo Craters –These massive holes in the land closely resembles a lunar landscape and are Earth’s version of the moon.Dimmuborgir Lava Formations – These ominous black lava formations are often thought to be the entrance to the underworld.Mt. Namafjall – This mountain is one of the hottest temperatures on the island and you should be careful to stay on the trails to avoid burns!Myvatn Nature Baths –These ice blue lagoons provide a relaxing getaway from sightseeing and are all natural!Husavik town and whale watching – This little fishing town is well renowned for its summer whale watching from the harbor and the whaling museum!Lofthellir cave – This cave is full of ice and lava and really gives you the feeling of descending into darkness.Dettifoss Waterfall – This waterfall boasts the greatest volume of water of any other falls in Iceland!

Day 5: Explore northern Iceland on your own and view any of the places from Day 4 that you may have missed!

Akureyi – A small fishing center in the very north of Iceland. Stop here for a few hours to sightsee or take an art tour.Siglufjordur – Drive along the fjords to this beautiful little fishing town for the night!

Day 7: Day of leisure in Siglufjordur

Day 8: Drive back into the south of Iceland

Hvitserk rock formation – one of the most unique formations in Iceland is a stand alone arch in the middle of a rather stark landscape.

Day 9: Reykjavik – Day at leisure to sightsee around the city before departing for home tomorrow

Blue Lagoon – stop at the lagoon for one final warm dip in the icy blue waters before boarding a plane home!