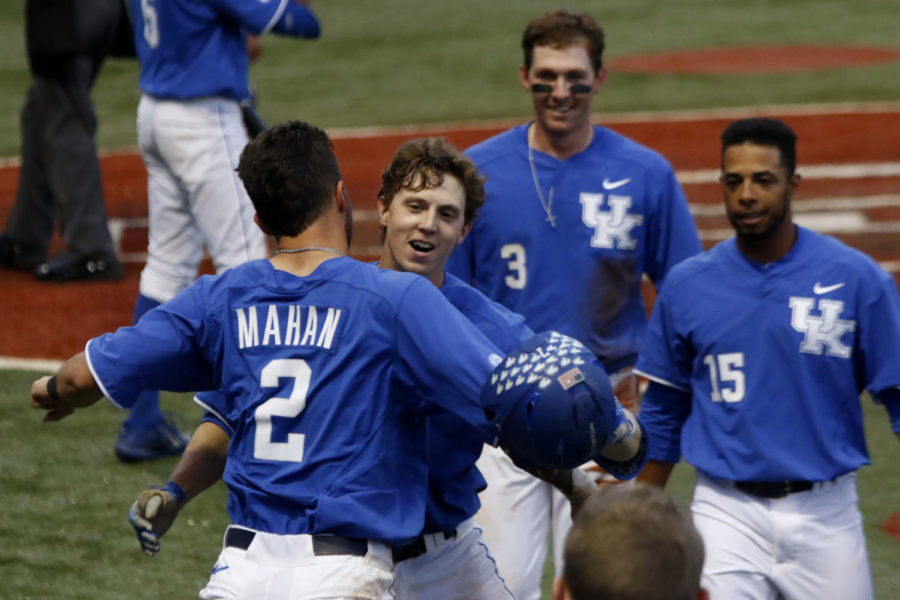 Connor Heady celebrates with Riley Mahan (2) after a home run during the game against the Louisville Cardinals on Tuesday, April 18, 2017 in Lexington, Ky. Kentucky defeated Louisville 11-7.

For the first time since 2006, the UK baseball team will host an NCAA Regional Championship, where they will be looking to advance to the super regionals next weekend.

In order to qualify for the College World Series, the Cats will need to win the regional and super regional tournaments.

The Cats will start their postseason run on Friday, as UK will face the 16-time Mid-American Conference champion Ohio University Bobcats at Cliff Hagan Stadium, the Lexington Regional host site.

Led by their fifth-year head coach Rob Smith, the Bobcats are 31-26 on the season. The Bobcats are 17-28 all-time in national postseason play and are making their second tournament appearance in the last three years.

As this is only their ninth tournament appearance and the second time in school history that the Cats have hosted a regional, a regional win would make history in the program and achieve something that has never been done before, a topic that both the players and coaches have discussed all season.

Spencer Ibarra (right fielder, Sr., Ohio) Ibarra leads the Bobcats in eight offensive categories, including home runs and batting average and has been a force in the outfield in his last year with the club.

Sean Hjelle (pitcher, So., UK) Although Hjelle is coming off of his worst outing of the season with his performance at the SEC Tournament, he has been extremely consistent for the Cats throughout the year, with a current 9-3 record and 3.87 ERA. As SEC Pitcher of the Year, First-Team All-SEC member and a 2nd-team All-American, the Cats are expecting a strong outing from Hjelle to propel them to a win in game one.

Connor Heady (shortstop, Sr., UK) One of the strongest players for the Cats in the SEC tournament where he went 4-7, Heady has had an impressive season and is among the three players in the club who have ever played in a postseason game. His experience will likely play a role in the team’s success.

Other players to watch for the Cats are All-American players Evan White, Tristan Pompey and Riley Mahan, who have been a big part of the offensive success that the Cats have had this season.

It is imperative that the Cats have a strong offensive showing this weekend, as they did not perform their best in Hoover, Alabama after being shutout by LSU and struggling with South Carolina.

The double-elimination playoff will begin on Friday at noon between regionally seeded No. 1 regionally seeded UK and No. 4 Ohio and will be broadcast on ESPNU. Indiana and North Carolina State join in on the action and will play at 7:00 p.m. Friday evening