Cats dominate in the 2017 NBA Draft 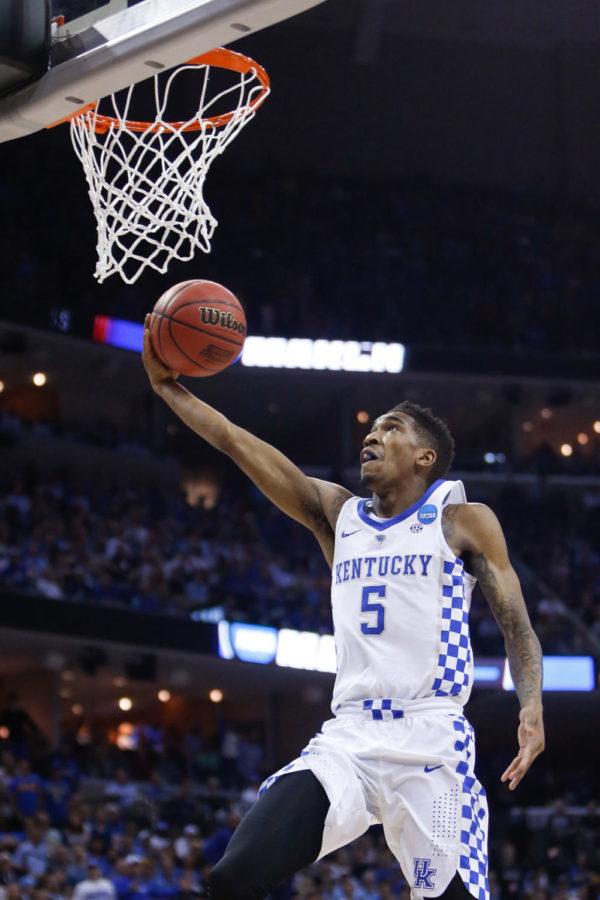 It’s a common story for the John Calipari-era Cats. Freshmen come to UK to play basketball and dazzle the nation before heading off to showcase their skills in the NBA. Thursday evening, three more Cats added their names to the long list of Cats drafted in the first round: point guard De’Aaron Fox, shooting guard Malik Monk and forward Bam Adebayo.

Fox was the first Cat to be drafted, taken fifth overall by the youthful Sacramento Kings. He is the third UK player to be taken with one of the first five picks since Anthony Davis was taken with the first overall pick in 2012.

He was quick to speak of his draft experience as one shared by his family, teammates and coaches directly after being drafted, saying that, “We’re living out our dreams together.”

Fox will be playing alongside fellow Cats Skal Labissiere and Willie Cauley-Stein, as well as joining other top collegiate talent drafted by the Kings in the form of North Carolina’s Justin Jackson and Duke’s Harry Giles.

The SEC Freshman of the Year, Monk was projected to be drafted with one of the first ten picks in the draft, but fell slightly to the eleventh pick, being selected by the Charlotte Hornets.

He’ll join an elite Cat in Michael Kidd-Gilchrist, as well as All-Star point guard Kemba Walker. Monk, after being selected, said that his usefulness to Charlotte will be exemplified in his ability to score at all three levels, saying that he’s a “pretty good shooter.”

The third and final Wildcat taken in the draft lottery was Adebayo, taken fourteenth overall by the Miami Heat. He’ll be the lone Cat in South Beach, as he’ll likely play a backup role to dominant center Hassan Whiteside.

“We’re like brothers, this is like our graduation again,” said Adebayo when asked about his connection to his fellow Cats in the draft.

For the second time in three years, the Cats have sent at least three players to the NBA that have been selected with the first fourteen picks.

Sophomore guard Isaiah Briscoe was the fourth and final Cat that hoped to be drafted, but wasn’t selected in either round of the draft. He surprised fans with his departure from UK at the end of last season, after the Cats were eliminated in the regional final against North Carolina.