UK baseball caps off historical night with a win 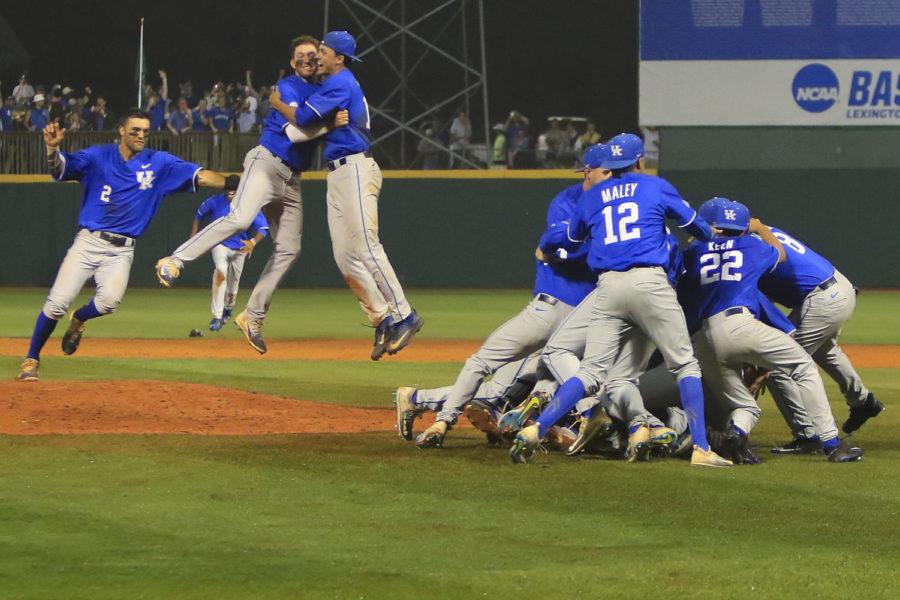 No. 1 regionally seeded UK baseball has accomplished something never done before in the history of the program, they are regional champions.

After a tough loss on Saturday versus NC State, the Cats would need to win three games in a row to advance to the Super Regional and with their backs against the wall, they answered the call.

Not even a two-hour rain delay could deter BBN from coming out to support their team. For the second time in the regional, the attendance record at Cliff Hagan stadium was beat. A record 5,005 fans poured back in the stadium the moment the announcement was made that fans could re-enter the stands.

“Having Big Blue Nation come out and support us and break the attendance record twice in one weekend was just huge and having that support behind us and just knowing that we have the support of basically the entire city behind us is just so cool,” right-handed sophomore Sean Hjelle said.

“I’m confident that they helped win that game today and I couldn’t be more appreciative,” head coach Nick Mingione said.

Left-handed junior Zach Logue took the mound for the Cats and was relieved by senior Logan Salow in the bottom of the 4th inning. Both had strong performances and each recorded four strikeouts.

NC State took the lead in the bottom of the 2nd after Brett Kinneman hit a two-run home run to right field. The Cats answered in the top of the 4th, capitalizing on an error by NC State’s Will Wilson to take a 4-2 lead.

The Wolfpack scored three more runs in the 4th and 5th innings, but in the top of the 7th after back-to-back walks, another fielding error and a passed ball, Kole Cottam blew the game wide open with a two-run double to right field.

After only two days of rest, UK’s ace and SEC Pitcher of the Year Hjelle replaced Salow to close the game. His command was superb and he recorded five strikeouts in three innings, throwing only 35 pitches. Last season he set the freshman record for saves and the coaching staff was confident in his ability to secure the win.

A sea of blue and white singing “Sweet Caroline” by Neil Diamond really boosted Hjelle’s confidence and helped him maintain his command through three innings.

“Usually I try and block that out, but when the entire stadium is singing ‘Sweet Caroline,’ I kind of got chills and that was another unforgettable moment,” Hjelle said.

The Cats scored three more runs in the top of the 9th, giving Hjelle some insurance runs, only needing three outs to the championship title.

“I’ll never forget the image in my head of just looking at the dugout and seeing all of those guys rush at me. The feeling of being crushed right there was so worth it,” Hjelle said after the win.

“This goes way deeper than just baseball. This makes them believe that they can do things that have never been done before and that is really powerful,” Mingione said.

The Cats will play the Louisville Cardinals in the Super Regional this weekend in a best-of-three series. In the regular season, they split the games 1-1 and the Cats hope to defeat their instate rival as they move one step closer to Omaha, Nebraska for the College World Series.