After many close finishes, Sha’keela Saunders is ready to win a title 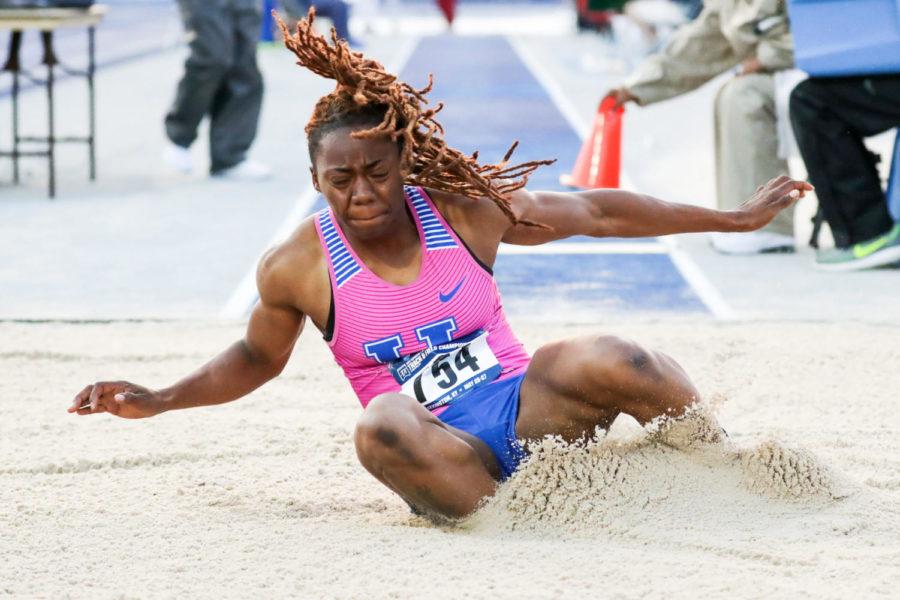 Sha'Keela Saunders jumps on day one of the 2017 NCAA East Preliminary Championships on Thursday, May 25, 2017, at the Kentucky Track and Field Complex in Lexington, Ky. Photo by Elliott Hess | UK Athletics

Senior long jumper Sha’Keela Saunders has one thing on her mind as she heads into her final NCAA Outdoor Track & Field Championships; it’s time to attack.

“I’m going in there with a fire in my eyes,” Saunders said. “I feel like I’m just ready to attack and score some big points for the team.”

Saunders will go into Outdoor Championships looking to win the top prize in the long jump. Saunders has accomplished many great things during her career at UK, but she has never won an outdoor national title.

Saunders also jumped to a third place finish at Outdoor Nationals her sophomore year. In total, Saunders has posted nine All-American finishes in her career, five in the long jump, three in the triple jump, and one in 4×400 meter relay.

Despite all the close calls, Saunders’ closest finish might have been at the 2016 Olympic Trials, when she was one inch and 3/4 quarters away from making the U.S. Olympic Team.

Saunders has won a national championship before, as she had the meet of a lifetime at the NCAA Indoor Track & Field Championships just a couple months ago, winning the long jump. Her final jump of 6.90 meters was just one centimeter away from the collegiate indoor record.

“This is my final shot to win a national championship outdoor,” Saunders said. “Some people think it’s a pressure on me but not really — I’m just ready to go out there and attack and go for the win.”

If Saunders performs well, she will put her team in a good position to make the podium. The Cats are ranked No. 5 going into nationals; behind defending champion and SEC rival No. 2 Arkansas.

“I think we jumped up about two spots in the national rankings, which is pretty good but we still want better for ourselves and I think were ready to attack that,” Saunders said.

Saunders will go for the win on June 8, when the women’s long jump event starts at 6 p.m. The event can be watched on WatchESPN.com (subscription required).

Regardless of what happens, Saunders has had an illustrious career at UK and is one of the top long jumpers in program history. The multiple school record holder has come a long way from the rough start early in her college career to now chasing a championship.

“Coming into Kentucky, tore an ACL, I never thought the success would be this great,” Saunders said. “Edrick Floréal has really just made me a lot better than I ever imagined that I could be. Being ranked as one of the top competitors at nationals is just a great opportunity.”