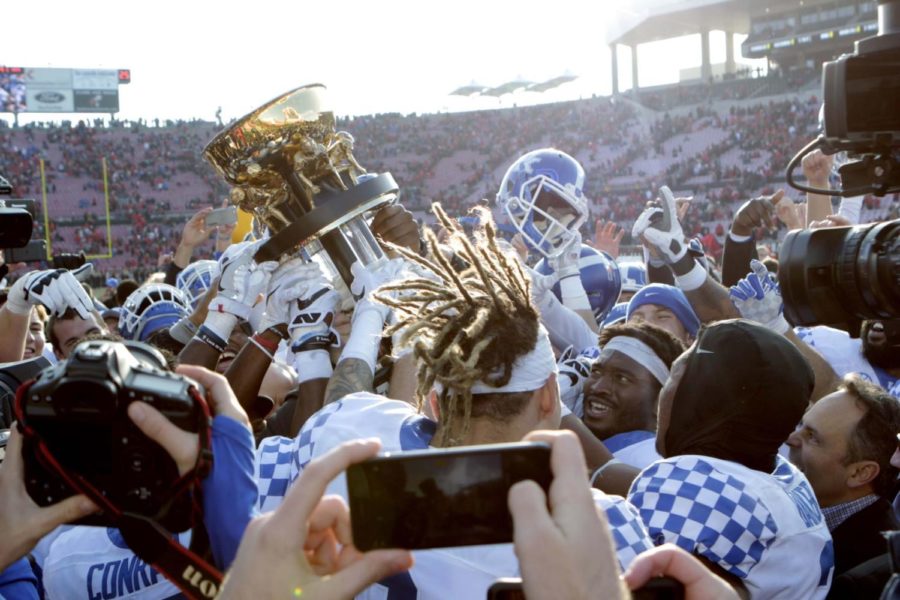 Kentucky defeats Louisville, 41-38, and wins the Governor's Cup for the first time since 2010 on Saturday, November 26, 2016 in Lexington, Ky. Photo by Hunter Mitchell | Staff

The 2016-2017 athletic year for UK was a memorable and successful one, capped off by the university placing 10th in the Directors’ Cup. Luckily for every die-hard UK fan, the SEC Network will highlight the previous years’ achievements for 24 hours on the SEC Network.

The third annual SEC Network is set to begin on July 17, with UK being the school to kick things off. Each school gets a chance to takeover the channel for 24 hours and replay some highlights from the previous year.

UK has a full slate of classics lined up for the 24-hour Big Blue marathon, as men’s basketball, football, men’s soccer, volleyball, gymnastics, women’s basketball, softball and baseball games will all be featured during the takeover.

UK men’s basketball’s dramatic win over UNC in December will kickoff the takeover at midnight, with plenty more exciting replays to follow. Some other marquee replays include UK football’s upset win over Louisville (8 p.m.), men’s basketball’s win over UCLA in the Sweet 16 (5:30 a.m.), and baseball’s historic win over NC State in the regional final (5:30 p.m.).

There will also be several features played throughout the day to give fans a break of watching old games. John Calipari’s ESPN 30 for 30 documentary “One and Not Done” will close out the takeover at 10 p.m., and baseball will have a half-hour behind the scenes story at the Super Regionals starting at 7:30 p.m.

At 10:30 a.m. and 5 p.m., Mitch Barnhart will sit down with some popular UK athletes to discuss what life as a student-athlete is like.

A full schedule of UK’s SEC Network takeover can be view below.