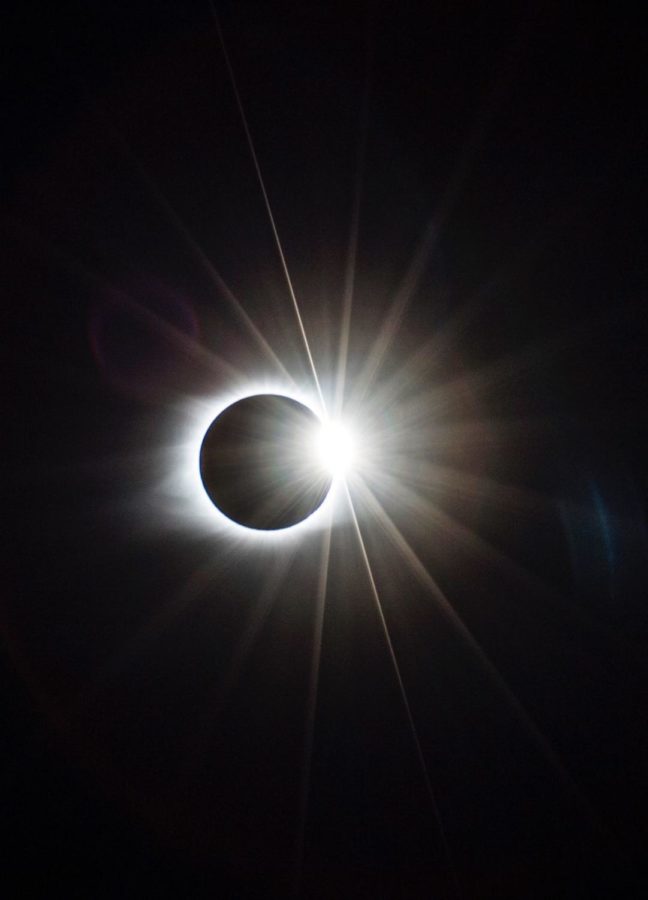 The diamond ring phase of the total solar eclipse as seen from an Amish farm in Cerulean, Ky., on Monday, Aug. 21, 2017. The vantage point was host to hundreds of spectators and NASA, chosen because of the duration of totality which began at 1:25 p.m. CDT. Photo by Arden Barnes | Staff

Thousands of people waited in line for ice cream at Chaney’s Dairy Barn during the weekend leading up to the solar eclipse.

Chaney’s is a popular tourist destination located in Bowling Green on just about any weekend, but with the eclipse just days away, the wait for ice cream was even longer.

One customer who had lived in Bowling Green before had returned to view the eclipse. Though she was once a Bowling Green resident, this was her first trip to the local farm that doubles as a restaurant and ice cream shop.

On Monday, cars filled the fields surrounding the barn for a good view of the eclipse.

This scene was repeated all over western Kentucky, in the areas lucky enough to be in the path of the solar eclipse.

Hopkinsville, the best city in the country for viewing the total eclipse, nicknamed itself “Eclipseville” as it prepared for the big day. Hopkinsville has a population of about 32,000. More than triple that amount came to the city to see the eclipse.

But there are some data to represent just how many people flooded into the state. Lawson said six lodges sold out in Western Kentucky, and several campgrounds were filled with overflow areas for tent camping.

A school group from Ohio that participated in the same NASA livestream that a team of UK students did stayed in a lodge in Pennyrile Forest State Resort Park.

Lawson said there were guests from all over the U.S., as well as from foreign countries like Canada, Poland and France. He said the department gathered some of this information by looking at license plates.

Lawson said the comments from most guests were positive.

“Also good for parks was the fact that people from out of state visited us for the first time and will tell their friends and families about Kentucky State Parks and their experience with us,” Lawson said.

Unfortunately for the state, when the eclipse was over, people had to drive home. Kentucky’s parkways and interstates were backed up for hours on Monday afternoon and evening.

A small part of western Kentucky will have a view of the next expected solar eclipse in 2024.