Former UK basketball greats weigh in on this year’s Cats 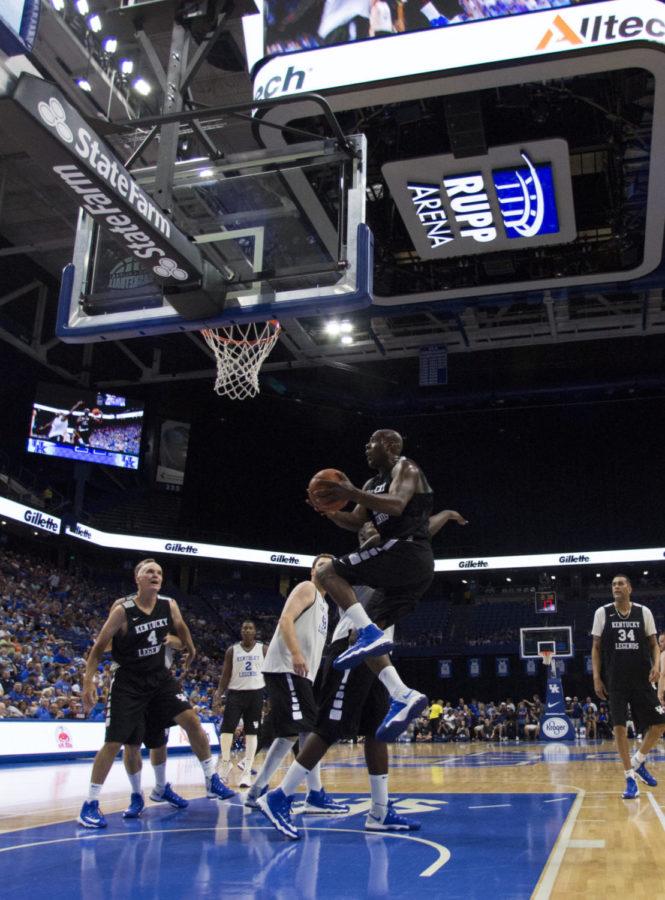 Heshimu Evans goes for a basket during the Legends Game on Friday, August 25, 2017 at Rupp Arena in Lexington, Ky. Photo by Arden Barnes | Staff

When a player signs with UK to play basketball, they’re joining a list of NBA All-Stars, coaches and even team presidents as a member of the Cats basketball family.

“When you go down, and you walk in the [Joe] Craft Center, and you see the line of jerseys, and you see all the history, I think, you know, you don’t have to say too much,” former Cat Heshimu Evans said after the Charity Alumni game on Friday. “I think it gives a kid very much an idea of what they’re getting into.”

Evans transferred to UK from Manhattan College in 1996, and was a key role player off the bench during the Cats’ 1998 National Championship run. He finished his career at Kentucky averaging 10.3 points and 5.4 rebounds per game.

The hardest part for the many young five-star recruits that play for the Cats, however, can be transitioning into a professional atmosphere.

“We always get caught up in seeing players,” Karl-Anthony Towns, former Cat and 2015 NBA Rookie of the Year said. “Our team, we never talked about players to watch, we were a team to watch.”

He elaborated on his perspective later, saying this year’s UK basketball squad needs to “put their egos aside, put that ‘I’m the man’ mentality aside, that they all have, respectively, because they all were ‘the man’ in their respective high school programs, you know, they can be something truly special.”

Towns is the shining example of what UK players looking for fame in the NBA are trying to be. He’s in a Gatorade commercial currently airing, has been endorsed by multiple companies and even has a cameo in pop star Katy Perry’s “Swish Swish” music video.

With the pedigree of players that UK basketball is known for, there’s a lot to live up to for the Cats’ incoming freshmen. Friday’s Alumni Charity game featured 18 NBA players and two NBA coaches both past and present as the current young, wide-eyed Cats looked on.

The Cats also had the chance to work with some of these pros on the court in the days leading up to the charity event. The New Orleans Pelicans came to Lexington to work out in the UK facilities, and this year’s team took the opportunity to train with the Cat-heavy team. Four former UK players worked out with the team, including NBA Champion Rajon Rondo, perennial All-Stars Anthony Davis and Demarcus Cousins, and Kentucky native Darius Miller. None of the Pelicans players were available for comment after the Alumni Charity game.

Towns ended the night with one last comment on this year’s Cats team, saying that they’re a team “we could be talking about for years and years to come.”