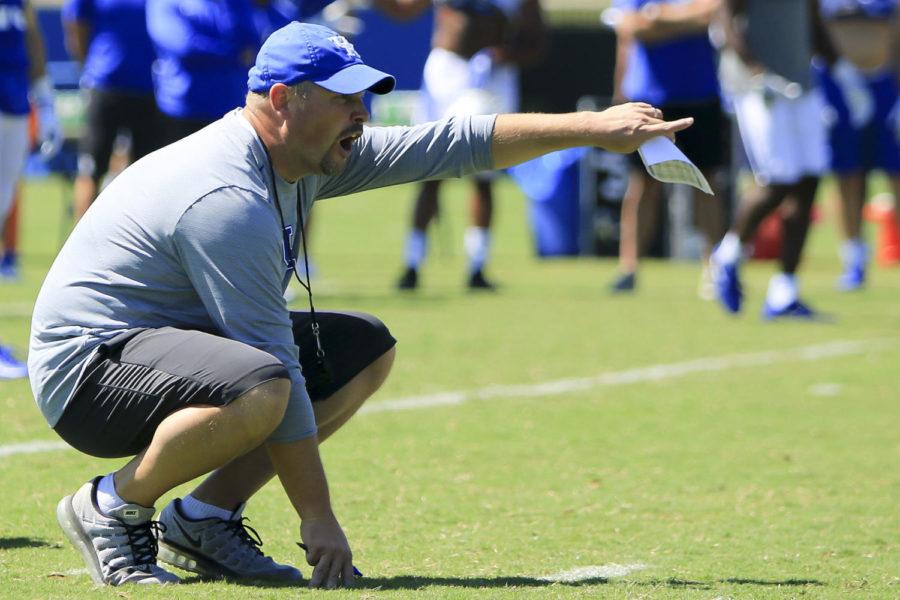 Approaching a season full of both skepticism and high expectations from UK football fans, the team’s first full-contact scrimmage, held on Saturday, didn’t go how most would predict for the revamped Kentucky squad.

“It was okay,” head coach Mark Stoops said with a shrug after the practice was complete. He said that he was just glad the first game at Southern Mississippi is still three weeks away.

Stephen Johnson, last season’s standout quarterback, said that he didn’t know who fumbled the ball on the play but that it took the wind out of the offense’s sails after such a successful drive.

However, the offensive struggle for the Cats continued through the first half, according to Gran.

“We came back, second drive, drive it all the way down again, but we can’t execute,” Gran said.

The offense righted the course in the second half, scoring two touchdowns, hence the redemption to the overall evaluation of “okay” by Stoops.

Coaches and players alike raved about the play of the young wide receiver Lynn Bowden, who only recently arrived on campus.

“He was one of the guys that showed up,” Gran said.

Drew Barker, the quarterback injured for most of last season, said he was extremely impressed by Bowden.

“We’re just trying to get the ball in his hands,” Barker said. “He can make people miss.”

Gran also said that senior Garrett “Juice” Johnson was extremely effective as a receiver both inside and outside during the scrimmage today.

House said that the physicality of the defense was extremely good, but they gave up two big runs early due to lack of technique. Consistency while defending the run was a problem for the Cats last year, as teams would exploit the underperforming run defense.

House said the defense had “flashes” of being extremely robust.

“We don’t want flash, we want to be consistent,” House said.

With a couple more scrimmages to get back on top of their game, the Cats have a lot of work to do, according to the coaches. As they approach Sept. 2, when they’ll hope to exact revenge on Southern Mississippi, consistency and ball security seem to be the common causes for concern.