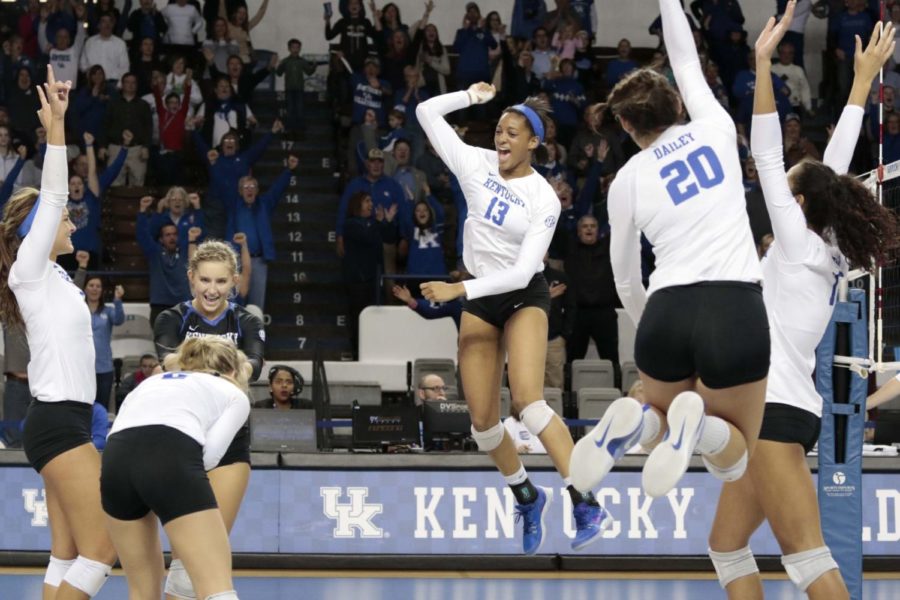 Members of the University of Kentucky women's volleyball team celebrate after scoring a point during the match against Texas A&M on Sunday, November 20, 2016 in Lexington, Ky. Kentucky won the game 3-1. Photo by Hunter Mitchell | Staff

The UK volleyball opened their season on Wednesday hosting their first ever exhibition match in Memorial Coliseum. This match was an opportunity for both teams to build on their skills, and not necessarily compete since it was a friendly match.

Wins and losses will start counting for both teams on Aug. 25 when UK and WKU open their season against different opponents.

The freshmen got off to a great start with Gabby Curry setting a match-high of 23 digs, followed by Avery Skinner having a match-high of 15 kills. Both Madison Lilley and Olivia Dailey combined for 49 assists, 12 digs, five aces and two blocks.

However, the climax of tonight’s match was the Cats’ performance with serving. The Cats posted 15 aces and freshman Lilley led the team with a match-high of four.

“I was pleased with our focus and serving throughout. Everyone contributed in one way or another and that’s really what we wanted to get out of tonight and we certainly accomplished that,” said head coach Craig Skinner in a press release.

Tonight’s match was full of different line-ups for different types of situations. The exhibition saw the highly-regarded freshmen contribute to this UK team as well as the upperclassmen.

“We have this upcoming week to iron out the wrinkles and we have some pretty big matches coming. We’re looking forward to it,” freshman Lilley said.

The Cats’ regular season will begin with the annual Bluegrass Battle on Aug. 25 in Memorial Coliseum. The Cats will start the battle at 11 a.m. with Arkansas State, and later that evening at 9 p.m. the Cats will face No. 23 Utah.

The next day, the Cats will wrap up the tournament with a match against Cincinnati.