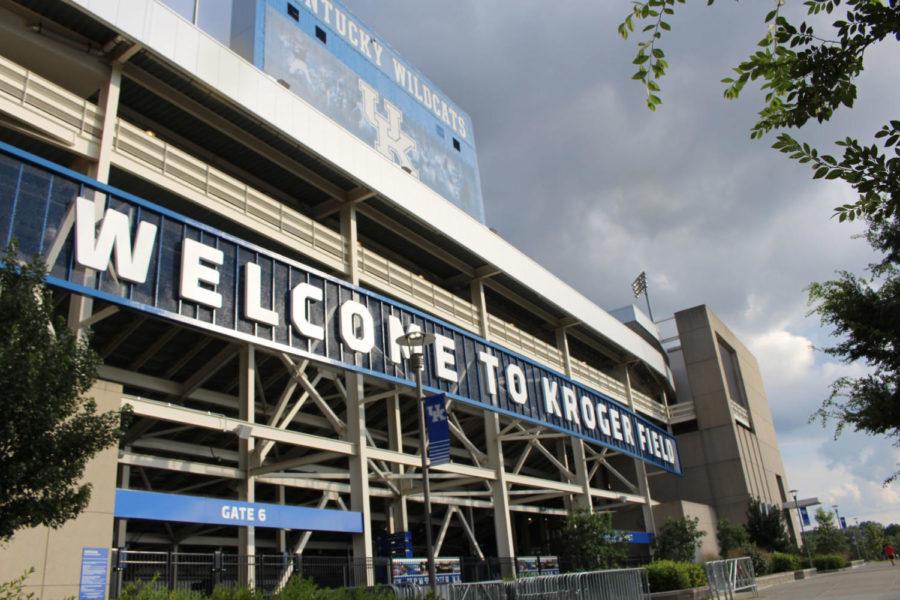 Back in May, when the news first broke out, the state of Kentucky mumbled some words under their breaths and rolled their eyes.

The thought of adjusting to the newly renamed football stadium of the Kentucky Wildcats was just absurd for most of the Big Blue Nation.

For years, some all their lives, their home away from home was known as Commonwealth Stadium. Now it all of suddenly had been ripped of its name and sewed back on as Kroger Field? Some didn’t take kindly to that.

Now, nearly four months later, school is in session and the UK Football team will soon be taking the field for their home-opening game against Eastern Kentucky. But after all the dust has settled, the sky has become more clear and fans are warming up to the new name.

Kroger is approaching their newest location with a positive atmosphere and focuses on being involved in student life, with Kroger plus members and athletic departments all over the state, especially at UK.

A new addition to the “pre-game” atmosphere in Lexington will be a VIP Tailgate event before each home game. As Kroger announced, “Kroger customers will be invited to a free tailgate featuring food and beverage with additional details set to be announced in the coming weeks.”

The partnership of Kroger Plus Members and Kentucky Football plans will be teaming up to make every gameday the best it can be.

All of the college kids living the student life have already benefitted from the newly branded field as well, as Kroger provided grocery carts to help students move into their new residences as the Official Grocery Partner of Move-In.

However, the impact of Kroger will reach out much further than UK’s campus. Kroger has announced that they plan to provide grants across the Commonwealth of Kentucky to improve playing fields and facilities and benefit communities throughout the state.

A committee has been formed to identify and select the fields that will receive those grants.

Fans initially might not be a fan of the new football stadium name, but nearly everyone will benefit in some type of way from the newly named stadium. The new name might take some time to get used to, but things are finally turning around for the ones who used to prefer Commonwealth Stadium over Kroger Field.