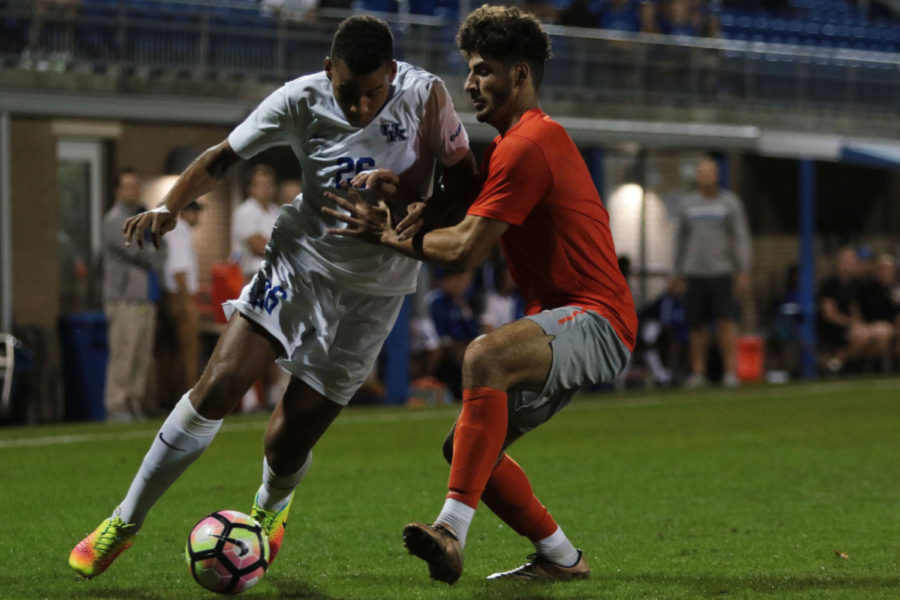 Freshman JJ Williams powers past a defender during the game against Bowling Green State University on Tuesday, October 18, 2016 in Lexington, Ky. Kentucky won the match in extra time 1-0. Photo by Carter Gossett | Staff

The first preseason game for the 2017-18 season for Kentucky was nothing short of plain. Despite a 2-1 loss to the Northern Kentucky University Norse, the game showcased flair and strength from both sides.

From the second the game started, both teams played fiercely and tried to set their own tones and enforce them. In the first 10 minutes, there were two fouls and two free kicks on both sides. A corner kick from UK midfielder Grant Mook, which could have set the stage for the Cats early, failed to create momentum after midfielder Kevin Barajas mishandled it.

Later on in the match, Kentucky made several poor mistakes as they had a handball in the 10th minute, while Mook was called offside seven minutes later.

A constant theme from the first half for Kentucky was trying to save the ball in tight positions near the sideline. While they made several key pushes on those sideline moves, they had difficulty getting past Norse defenders hounding the Kentucky offense.

In the 26th minute, Norse forward Tom Suchecki scored an unassisted goal after he beat Cats goalkeeper Jackson Hawthorne on the left side from a bouncing ball 18 yards out. Suchecki would come back three minutes later and score on a power strike from 22 yards out.

Toward the end of the first half, Kevin Barajas showed some dominant ball handling as he tried to get something going for the Cats, even as he penetrated from multiple defenders near the 6. However, the result reflected the majority of the Kentucky offense, and that was missed opportunities.

Going into the second half, the Cats offensive efforts were not making many strides. While the first half reflected more of a tight, aggressive approach going against defenders, their mentality appeared to change in the second half. UK tried to stretch the field by attempting longer passes in cornered areas and by flanking sides. However, the Norse continued to interrupt major plays that could have spelled hope for Kentucky.

Defensively, Kentucky did well in the net as Hawthorne made key saves in the 56th and 61st minutes. The Norse were also kept in check late as they did not score in the second half, despite their aggression and consistent movement.

Despite Kentucky’s offensive aches, UK’s sophomore forward JJ Williams scored a goal on an assist from fellow young standout Connor Probert in the 74th minute as he hit a header from a wide angle on the left flank. Probert nearly scored on an attempt several minutes later.

While a loss is certainly a pain even in the preseason, the Kentucky Wildcats seem to be resilient and confident with the regular season beginning Aug. 25.

“Were trying to build a culture here, so as long as we help each other out and as long as we’re on the right path we should be okay in the end,” fifth-year player Alex Bumpus stated when asked about the culture changes in the locker room.

Kentucky is indeed going through several changes this year as they lost three seniors from the previous season, and losing goalkeeper Stuart Ford for one game due to a red-card stemming from last year’s NCAA Tournament match against Creighton. Looking to lead the pack are Connor Probert and Noah Hutchins, two key midfielders who can capitalize on a positive opportunity and make it big.

It’s still a little early to judge Kentucky from one preseason game, but the Cats will attempt to move beyond today’s difficulties and look ahead to Friday’s game against Saint Louis.