Construction to change face of UK 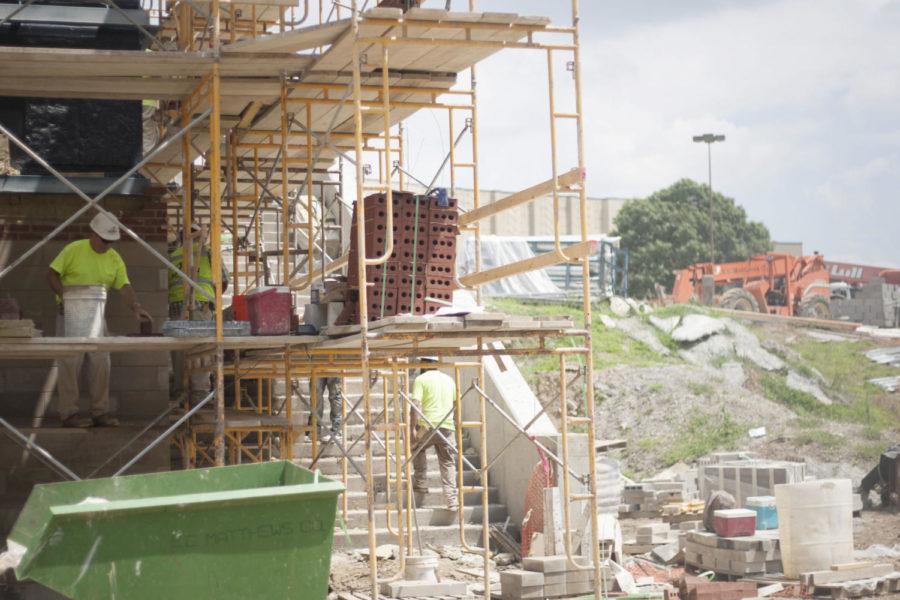 Construction continues on the new student center at the University of Kentucky in Lexington, Kentucky. on Tuesday, Aug. 15, 2017. Photo by Josh Mott | Staff.

The average UK student is no stranger to closed walkways, the sounds of jackhammers and traffic cones signaling campus construction projects. However, these small nuisances can lead to huge campus changes.

As students and faculty return to campus for the upcoming semester, they may find some of these changes already affecting campus.

Dall Clark, UK’s Capital Construction Director, said that the Student Center project will be completed in two phases. In January, food services will open and in April, the rest of the building will open, which includes the Barnes & Noble Bookstore, student social spaces, PNC Bank, Alumni Gym, UK Federal Credit Union and more.

Clark said that Bowman’s Den, which has acted as a temporary Student Center during construction, will remain open until April. The university will later decide what to put in the building.

In the summer, UK announced a new College of Law renovation project that plans to be completed in early spring 2019. The facility will hold more classrooms, faculty offices and courtrooms and be expanded by 26,000 square feet. The finished project will also have an opening facing Memorial Hall. Clark said the Law building project will be a “complete modernization,” similar to the construction on Gatton College of Business and Economics. During the project, faculty and students will be housed in the Lexington Theological Seminary, across from the law building.

“There’s been a tremendous change in the past ten years,” Clark said. “The university, either through its own funding or private means, has invested an excess of $2 billion, so there’s been a lot of changes.”

When deciding on which campus building to renovate or build, Clark said that the university is guided by the Master Plan, which determines the layout of campus and is updated every few years. UK’s Office of the President decides the timing and priority of construction projects. The conditions of a facility play a large role in deciding on potential projects, Clark said. UK has a large backlog of deferred maintenance work. Program growth can also play a factor in creation of construction projects.

Safety is the university’s number one priority when building these projects, Clark said. The construction department notifies the campus community about ongoing projects through a listserv found on their website, campus newsletters and UK Public Relations. University representatives also walk around the construction site and require contractors to have weekly safety talks with construction crews.

While some students do appreciate the finished projects, they do find the process a little inconvenient. Mechanical engineering junior Christian Hurst said that he hears a lot of students complain about construction noise in the morning while they are trying to sleep. He has also noticed some convenient walkways have been blocked by construction.

“As a whole, I feel like they are doing some good projects, but of course it does make things a lot slower to get around campus. It does cause some inconveniences. I am excited about some construction though like the new Student Center,” Hurst said.

When Hurst was applying to colleges, he did not rank colleges solely on their facilities, but UK’s new dorms and academic buildings were a bonus to him. Now entering his junior year, Hurst believes that UK creates more construction projects than the average college campus based on input from his friends at other universities.

Clark said that he doesn’t think UK spends more resources than other colleges on construction and updating existing faculties.

“Obviously, it varies from college to college, but I wouldn’t say that UK is any more invested than any other college,” Clark said. “Building 21st century facilities is very important to all universities. Many of us have aged infrastructure, or aged facilities that need modernization and one of our goals going forward is to do a lot of modernization on older, historical building stock, so we hope to bring those into the 21st century and modernize those in the next few years.”

Clark said that improving facilities on campus benefits retention rates, health, engagement and recruitment of both students and faculty.

“I think that the physical look and feel of a campus plays a large role in the general health and community of the campus.”

If anyone has questions or concerns about construction, they can find employees’ contact information on the construction department’s website. A campus map detailing impacts of construction can also be found on the website.