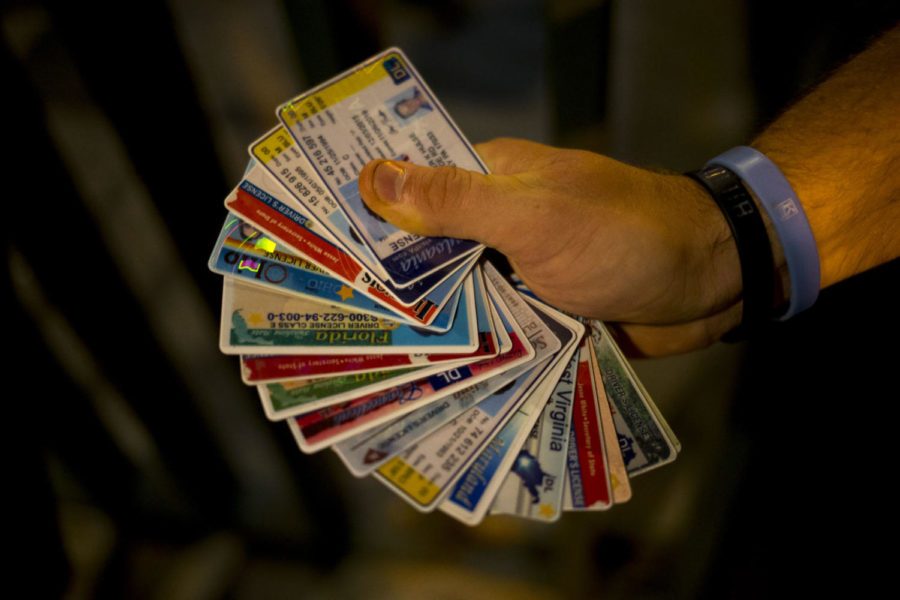 “Only need to pay a little time and money, you can own a new ID,” reads IDsbuddy.com, the website of an online fake ID distributor based in China.

The poor grammar is not the only thing that raises eyebrows. This underground business also offers shady promises:

“On weekends and holidays, you can go to bars and parties with your friends, booze, girl, all night. More wonderful life depends on what you choose. All you have to do is contact us! Let us act.”

This sorry attempt at advertising does have a point. For many underage college students, a “more wonderful life” does depend on what they choose. But what really leads to a better life? To own, or not to own, a fake ID?

Understanding where fakes come from and the consequences they carry, for the user and the community, is necessary to make an informed choice on fake IDs. Many UK students have made fond memories at Lexington’s bars. But, fake IDs can have a profound effect on those bars and the students who make their beloved college memories at them.

Marcus Sell, a sergeant with the Lexington Police’s Alcoholic Beverage Control, has been investigating illegal alcohol distribution and fake IDs for close to a decade. In recent years, he’s seen college students primarily buy fakes online from other countries.

“The most common place is China,” Sell said.

Gone are the days of the clever college student who sells homemade fake IDs to make a little extra money. That job, like many others, has been shipped off to places with cheaper labor and fewer regulations.

“Many [real IDs] come with laser engraving and the magnetic stripe on the back just like what your credit card has,” Sell said. “You know, it all becomes something big for a student to pull off or somebody in town to pull off. They’d have to have a very specialized printer and specialized material.”

Overseas manufacturers with specialized printers have capitalized on the ease of online shopping by selling fakes over the internet. To purchase a fake ID, a customer routes money, usually between $50 and $100, often to China, through Western Union or other money transfer services, to the bank accounts of a fake ID manufacturer like IDsbuddy. In a few weeks, a fake ID will arrive in the mail, often stuck between the pages of a book.

Some students choose to skip the ordering process entirely by simply using someone else’s fake or by using the real ID of an overage look-alike.

“There are [Facebook] groups and pages where someone will post, ‘Looking for an ID, with this color hair and this color eyes,’ and someone who is either of age or has a fake will say, ‘Oh, message me,’” said Janice Chase, a member of the Alpha Chi Omega sorority at UK.

“[Fake IDs] are not something that is endorsed by Greek life and Panhellenic,” Chase said. “It’s actually pretty frowned upon, but that does not mean people don’t have them and trade them.”

Regardless of how an ID is acquired, the challenges at the bar or liquor store are still the same. Bouncers, uniformed police officers and even undercover officers stand in the way of the wannabe 21-year-old. Those who are trained at finding fakes say they can be identified mainly by noticing small details or just by knowing how they feel.

Two Keys Tavern, a popular bar among UK students, is known to have a no-nonsense fake ID policy.

“Two Keys steals IDs,” yelled a passing bar goer during an interview with Two Keys security manager, Kevin “Tweeter” Deatherage. He is a 15-year bar security veteran with a special ability to sniff out fake IDs.

“I’ve actually had people get out of line when they see me at the door,” Deatherage said. “It’s a cat and mouse game for sure.”

Ryan Geoghegan has worked as a bouncer and security manager at Two Keys for 12 years. He is another expert on identifying fake IDs.

“There are subtleties in every ID that you can say, ‘Hey, I already know this one’s fake because there’s a certain number on the back that’s not there,’ and at the same time you’re getting people that come from states like Connecticut. There’s not a lot of people coming from Connecticut to go to UK. So, there are a lot of things that throw red flags,” Geoghegan said.

Kristina Sturm has worked in bars for close to five years and has been the general manager at Two Keys for close to a year and a half. Sturm says that subpar fake IDs are becoming more common.

“The IDs also have been getting a lot worse. Like you’ll just look at it and you’re like, ‘I don’t even know how you seriously just handed this to me,’” Sturm said. “That makes it a lot easier to catch the fake IDs because they’re so bad.”

“Last year, the Sunday before school started, I took 32 IDs at that door,” Geoghegan said. “My other door guy got about 10 or 12.”

Underage bar goers who use the real IDs of older look-alikes present a different challenge for the bar. The bouncers are tasked with identifying the differences between the ID and the person in front of them.

“You can kind of read body language and know, ‘You are going to be on the list of people that I look for,’” Deatherage said. “I tell [the bouncers] to find something about the person’s face first, then try to match it to the ID. A lot of times people will have freckles or moles—those are very distinctive, and the thing about girls is they never part their hair differently.”

Deatherage estimated that Two Keys usually collects 40 to 50 fakes per weekend and about 2,000 fakes per school year.

When a bouncer finds that an ID is fake, he will usually take the card and tell the ID owner to leave. If the owner insists the ID is real then the bouncer will call the police over to verify.

“Most of the time probably, you’re OK. Your fake ID, it gets taken by the bouncer and you get sent away, you go home,” Sell said. “The other times, you’ve actually handed it to a police officer, and at a minimum, if you’re not going to jail, you’re going to get a citation and you’re going to be commanded to appear in court on a certain day at a certain time.”

Deatherage has called on the police in the past.

“If we call [the police] they’re going to come and cite you,” Deatherage said. “I’ve had two different girls who pushed it to where the cops showed up. They told the cops that [their IDs] were real and the cops took them to jail.”

Sell warns against giving fakes to the police.

“[Underage patrons] don’t usually give fakes to the police,” Sell said. “You know, they hand us their real IDs. Sometimes they try to start with the fake and it falls apart quickly. So, when we run it we start to look at identity theft and the felony level. So, it’s like, don’t go down this road. Don’t lie to us.”

The laws around fake IDs carry a variety of punishments. Simply misrepresenting one’s age to purchase alcohol is a misdemeanor. Claiming to be someone else, like an older fraternity or sorority member, is identity theft—a felony.

“They’ll either sign you up to a diversion program where you’d be able to complete hours of community service and have it removed off your record,” Sell said. “If that system is not available you’ll have to go through the normal court system which could include jail time or a fine. The unfortunate part is if it goes that route, it stays on your record.”

To summarize, getting caught and cited for having a fake ID can cost a student: A few hundred dollars in fines, costs incurred during the legal process, class time lost while going to court and doing community service and however much the fake ID cost. That’s a lot more than “a little time and money.”

Very few students know that an underage bar patron caught inside the establishment also carries penalties for the business.

“The businesses are held to a really high standard and for them to have a juvenile on the premises it could be a $300 or $400 fine, one time,” Sell said. “The penalties go up from there, and places have even had their licenses taken away for continually catering to juveniles before it just shuts down an entire business.”

“We could lose our liquor license. When people come in with fake IDs they don’t realize that. They’re affecting a lot of people’s livelihoods. The person who owns the bar, the people that work behind the bar, the people that manage,” Sturm said. “They think we’re just being mean and taking their IDs just to be like, ‘fun suckers.’ We’re just trying to keep them safe and out of trouble, and we want these bars to stay open because so many people have a good time at them.”

“Not everybody walks out the door when you tell them it’s time to go,” Geoghegan said. “Especially when you find out that somebody is underage.”

Underage drinkers are more likely to make poor decisions with alcohol, like overdrink or drunk drive, which runs a major risk for the business that sells them alcohol.

“If you go to a liquor store, buy alcohol, get drunk, get in a wreck and hurt somebody, it ultimately comes back to the liquor store and they get charged for it,” Sell said. “Don’t get me wrong, in a situation like that, I feel bad for whoever is wrecked or is hurt because that’s way more important than a $4,000 fine for a business, but it still hurts them as well, so we try to look at it from both sides.”

What do students say?

“I think at 18, 19, 20, you don’t have a lot of life experience, so you’ve never been a business owner, or an entrepreneur that’s built something. [Business owners] know what it could feel like to lose that, but as a younger adult you don’t really know,” said Chase, a political science sophomore. “You don’t want to be the one that ruins it for this entire establishment. This is someone’s livelihood, people make their money off this, but also at the end of the day there’s people who are like, ‘Not my bar, not my problem.’”

Jasmine Ruiz, a sophomore biology major, cited a pressure to have fun with older friends as a motivating factor for many students.

“So, if you’re someone who is 20 and your friends are 21, then your year is like right then,” Ruiz said. “You want to have fun when they’re having fun because when it’s your turn then, your friends have already done it all.”

A “more wonderful life” could come with a fake ID, but for some it comes at a cost that is far greater than “a little time and money.”

“They think they’re just going out for the one night, but I’ve seen kids get into trouble. Some of these kids want to be nurses, doctors, lawyers or teachers,” Geoghegan said. “That one night out can ruin your entire future plans.”