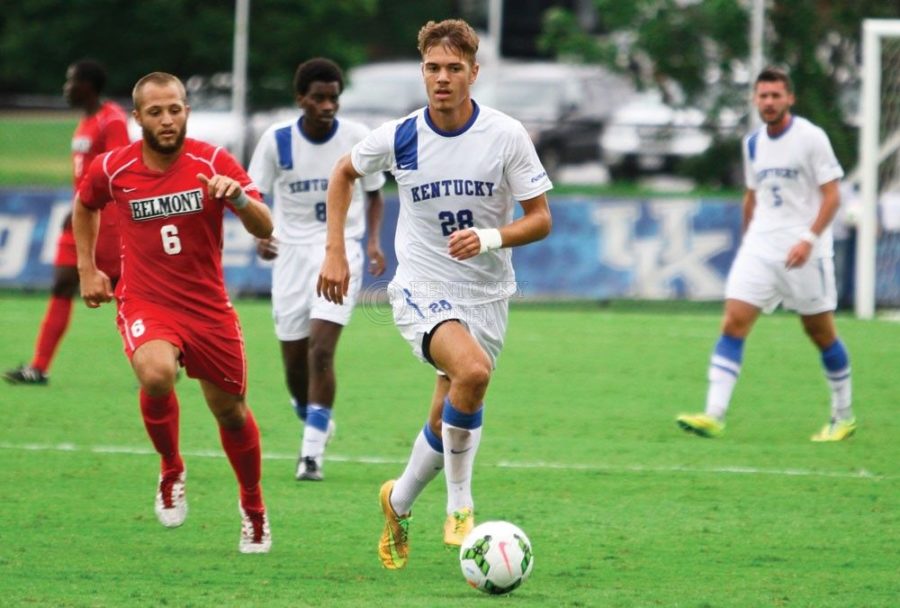 Kentucky freshman Stefan Stojkovic brings the ball up the field during the University of Kentucky vs. Belmont men's soccer game at the Wendell and Vickie Bell Soccer Complex in Lexington, Ky., on Sunday, August 31, 2014. Photo by Jonathan Krueger

After the UK men’s soccer team won an overtime thriller to kick off their season last week, they were able to pull out another tough one on Tuesday. The Cats defeated the Eastern Tennessee State Pirates on the road in Johnson City, Tennessee, 2-1 in double overtime. This win was due in part to a game-winning header from senior Stefan Stojkovic.

Coming off of an overtime win last Friday against Marquette, the Cats went into Johnson City looking to build off of that momentum. The game started out rough for UK. Despite having three corner opportunities, they failed to build off of them as they missed four shots. However, ETSU goalkeeper Jonny Sutherland had four saves for the Pirates as he tried to ward off the Wildcats offense that did make it to the goal.

ETSU added more headache for Kentucky as they immediately made a statement right out the gate. In the 17th minute, Joe Pickering scored a goal for the Pirates off of an assist by Bruno Andrade. This half was a challenge for UK goalkeeper Enrique Facusse as he had no saves when Middle Tennessee State had two shots.

Nonetheless, Kentucky went into the second half hoping to move on from their misfortune. Offensively, the team showed more strength as they attempted eight shots, including a near score by senior Kevin Barajas, despite only one corner attempt.

In the 75th minute, that resilience and perseverance eventually paid off. Stojkovic scored on an assist from Khalil Elmedkhar as he shot the ball five yards out to the right corner. Defensively, the team fought tenaciously to keep the Pirates offense in check, and a huge part of that was due in part to Facusse’s two saves in the second half.

As both teams went into the first overtime tied, Facusse proved to be valuable again with another integral save. Senior Alex Bumpus also provided a valuable takeaway on defense that helped prevent the Pirates from taking the game. Finally, after two overtimes, Stojkovic brought it home for the Cats as he scored the game-winning goal in the 107th minute. The senior’s golden goal was assisted by breakout sophomore Connor Probert.

Now sitting with a somewhat comfortable 2-0 record, Kentucky will look to continue their winning ways when they travel towards the other side of Tennessee to take on the Memphis Tigers on Sept. 2.