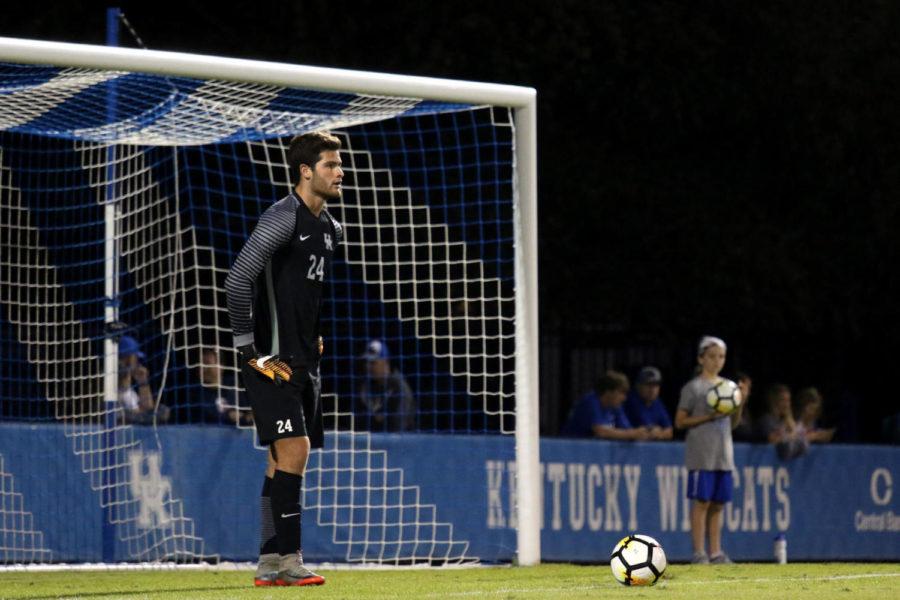 Freshman goalkeeper Enrique Facusse watches from the box during the game against UAB on Friday, September 8, 2017 in Lexington, Ky. Kentucky won the match 1-0.

As the Kentucky Wildcats men’s soccer team is off to a hot start, many people look at the different factors that contribute to the team’s success. Whether this comes from the clutch scoring of several stars, or the gritty and tenacious leadership by several seniors, there is something that should not be overlooked.

Although this one man stands alone, his performance can make or break the game regardless how the others do. With his quick movement, keen eye coordination and confident playmaking ability, freshman goalkeeper Enrique Facusse is undoubtetdly a force to be reckoned with.

Before stepping onto the scene for the Wildcats, Facusse came from a relatively impressive yet subtle background. Facusse hails from Tegucigulpa, Honduras, where he played club soccer for Universidad Pedagogica de Honduras. He later settled in Monteverde, FL with his family where he played high school soccer. While playing goalkeeper for Monteverde Academy, he caught the attention of college scouts, including those at Kentucky.

Coming into Kentucky, he was profiled as an athlete with mental agility, motivation, and unparalleled focus. In his personal statement for the NCSA, Next College Student Athlete, he stated that he understands the importance of working as a team in games. To him, this shows that team chemistry is the primary catalyst that drives success.

Facusse’s altruism is an integral part is important to the team’s success. Although is he focusing on bettering himself to go hard during games, he is ultimately focused on how the Wildcats perform. His leadership and positive outlook help drive both himself and his teammates to win.

“When I heard about this, I was surprised yet impressed. I think this is just the beginning for me. I come from a country where soccer is not everything, but to me, soccer has been everything my whole life,” Faccuse said when asked about the significance of this honor.

Seeing that the Kentucky Wildcats are turning many heads in the C-USA, the team has obviously shown team chemistry. Not only is this reflected by the stats of those defending and scoring on the field, but Facusse’s numbers easily speak for themselves.

In the Wildcats first five matches this year, he only allowed three goals, and had 19 saves with three shutouts. Against Marquette, he had a season high six saves, and carried a 86.4% save percentage on the year. Facusse ranks second in the C-USA in total shutouts and total saves among individual goalkeepers. He also ranks fifth in average saves per game.

In order for this team to continue the success it has enjoyed early, Facusse needs to keep it up with his solid performances. Although the Wildcats have been able to win two of their three games this year thanks to overtime shots, those would be meaningless without the perseverance and attention of Facusse in the goalpost. If he stays his course, he could come out to be the top goalkeeper in C-USA this season.