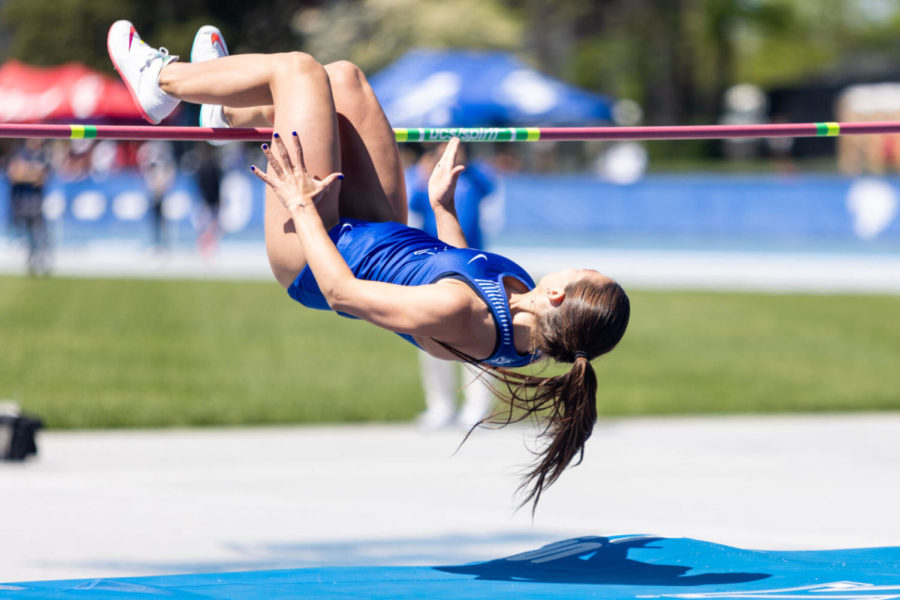 Senior Carly Hinkle clears the bar in the high jump during the Kentucky Invitational meet on Saturday, May 1, 2021, at Shively Track and Field Stadium in Lexington, Kentucky. Photo by Jack Weaver | Staff

The University of Kentucky track and field team won six events on day two, which was highlighted by nationally ranked mens and womens 4x400m teams, Abby Steiner and Alexis Holmes at the annual Pepsi Florida Relays at the University of Florida in James G. Pressley Stadium.

“I think we found our identity today and that in adverse times, that’s when true champions are established, that’s when championship teams are developed. I think the majority of the group stepped up today,” associate head coach Tim Hall said.

Abby Steiner shined in the 100m, winning the race with a personal best time of 11.10. The fourth fastest in the NCAA all season. Her performance marked the fourth fastest time in UKTF history.

Alexis Holmes put herself right back at the top in the 400-meters despite the rain, with a win and NCAA leading time of 51.94. It was an outdoor personal best, and put her fourth best for UK all-time in the event.

Russell ran a personal best 55.41 with a stellar finish for second place in the 400m hurdles, beating her previous best that she had set at the 2021 NCAA Outdoor Championships.

Davis ran 22.97 in the 200m to finish second and earn an outdoor personal best in the event. Her performance earned her the ninth best spot in UKTF history outdoors.

Leppelmeier broke her own school record in the hammer throw with a mark of 212’6”/64.79m, finishing third collegiately and fifth overall, while Gearing ran a personal best in the 1,500m when she finished fourth (4:17.25), becoming fifth fastest for UK all-time in the event.

The Wildcats head down to Baton Rouge, Louisiana for the Boots Garland Invitational on Saturday, April 9 while some distance runners will travel to Oxford, Mississippi and compete at Ole Miss on Friday, April 8 and Saturday, April 9.