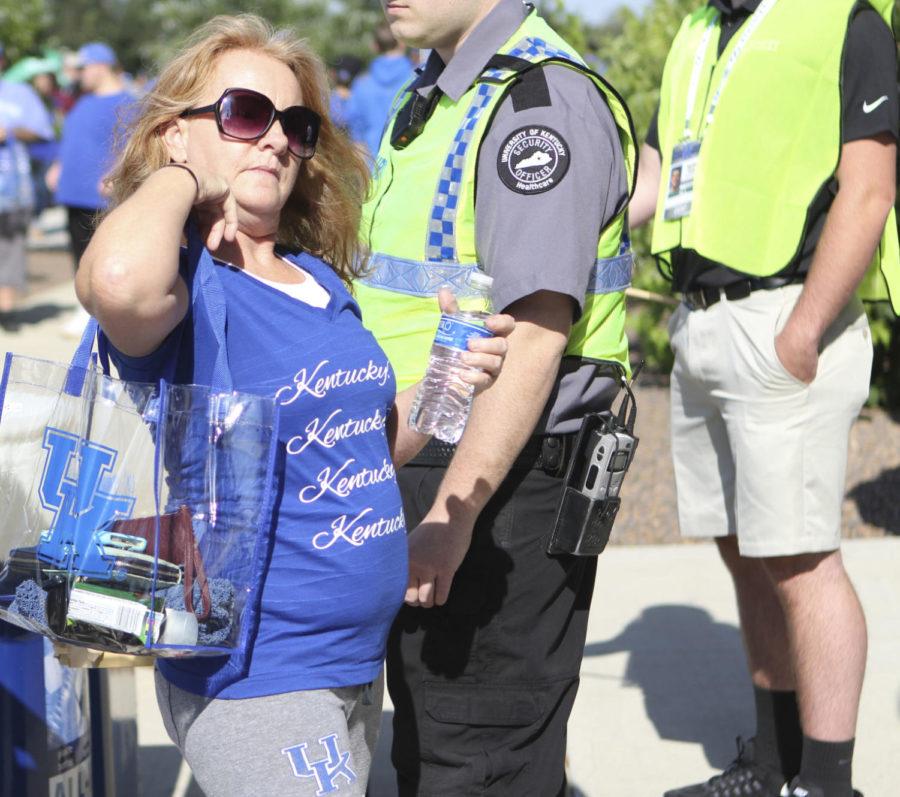 A fan walks into the stadium using the new clear bag the University of Kentucky provides before the game against EKU on Friday, September 8, 2017 in Lexington, Ky. Photo by Carter Gossett | Staff

A flyer passed out to fans stated, “To enhance security measures and help speed entry, the SEC has implemented a clear bag policy for all football games starting this season.”

Many fans carried transparent bags on their way into the stadium.

Guest Services assistant Judy Williams handed out bags to those in need. Anything larger than a 4.5” by 6.5” handbag was not allowed, unless it was clear.

“If we see people walking by with a backpack, we just call it to their attention that they need a clear bag,” Williams said. “If we see they have a purse that is oversized, we tell them it will not make it through.”

Williams said the rule is being enforced at all other Southeastern Conference schools.

Some fans weren’t phased by the new policy due to other stadiums’ implementing the clear bag rule prior to this football season.

“When the ticket office sent us the tickets, it stated we had to have the clear bags,” Tingle said. “The university is really good at keeping us informed.”

Wildcats fan Dana Earley was turned away after trying to get into the stadium with a too-large bag.

“We are going to go find a random tailgater and see if I can leave it with them, I guess,” Earley said.

Early said that at first she was told she could roll up her bag and place it in a clear bag, but security then said that was not allowed.

More information about the clear bag policy can be found here.