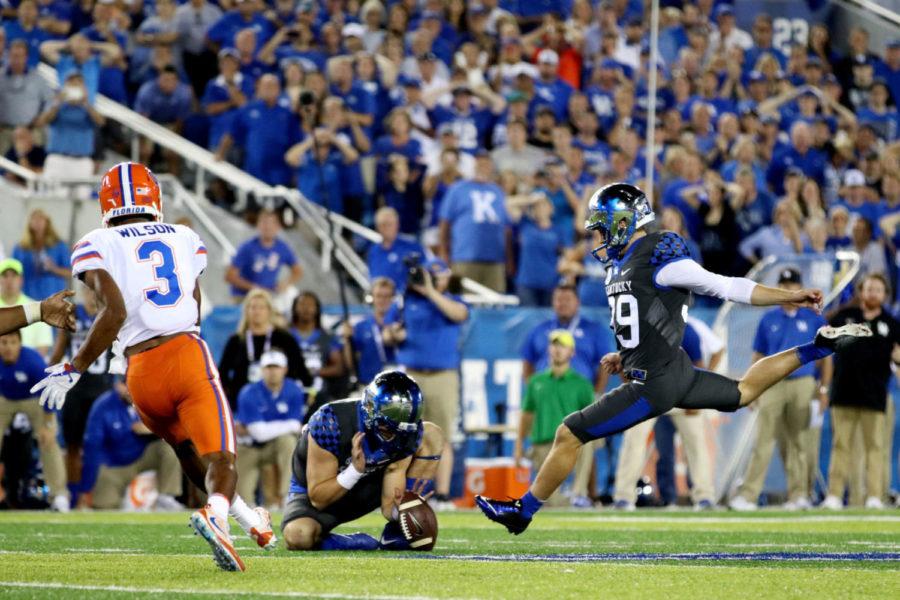 Kentucky kicked Austin MacGinnis misses the game winning field goal during the game against the University of Florida on Saturday, September 23, 2017 in Lexington, Ky. Kentucky was defeated 28-27. Photo by Chase Phillips | Staff

UK football has suffered many tough losses to Florida during the recently extended 31-game losing streak, but Saturday night’s loss at Kroger Field ranks amongst the worst.

The Cats led by 13 points with 11:33 remaining in the game, and UK fans thought this could be the night that Kentucky makes history.

However, just over 11 minutes of game time later, those same fans excited the concourses of Kroger Field crushed and disappointed. The Gators would score two touchdowns in the fourth quarter to steal the win by one point.

“These players have worked to put them self in a position to play like that and sometimes you’re going to come up on the wrong end,” head coach Mark Stoops said after the game. “That definitely hurts when you invest what we have invested.”

What will make the loss hurt more are the costly mistakes UK made during the course of the game?

On a fourth and 3 play with 3:24 remaining in the first half, the Cats left Florida wide receiver Tyrie Cleveland uncovered, allowing him to easily score a 45-yard touchdown to tie the game.

At the moment, that play wasn’t a game crusher, but looking back on it, the Cats needed to erase those seven points off Florida’s scoreboard to come out victorious.

“By the time we realized that there was nobody on him (Cleveland), I tried to call a timeout and it was too late,” Stoops said. “I was fractions off of getting the timeout.”

Not learning from their mistake in the first half, the Cats left Florida wide receiver Freddie Swain uncovered, letting him easily score the game winning touchdown.

The Cats would get the ball one last time, only needing a field goal to end the losing streak. They would get down to Florida’s 25-yard line off a Benny Snell 10-yard carry, but instead the play was brought back to Florida’s 45 because of a holding penalty called on Nick Haynes.

Austin MacGinnis would be set up with a 57-yard field goal for the win, but the kick came up just a couple yards short, clinching Florida’s 31st win in-a-row over the Cats.

This game will be tough for the players and fans to swallow. The buildup towards the game was tremendous, and throughout most of the game the Cats actually looked like the better team.

“We did our thing on special teams, the defense and offensively,” Snell said. “I felt like we were the better team, but whether it’s just the mistake of the guy being open, or the flag, we just beat ourselves, and that’s just that.”

Many players agree with Snell that the Cats were the better team, however, it doesn’t matter how good of a team you are. If you make mistakes, they could comeback to hurt you, and that’s exactly what happened to the Cats on Saturday night.