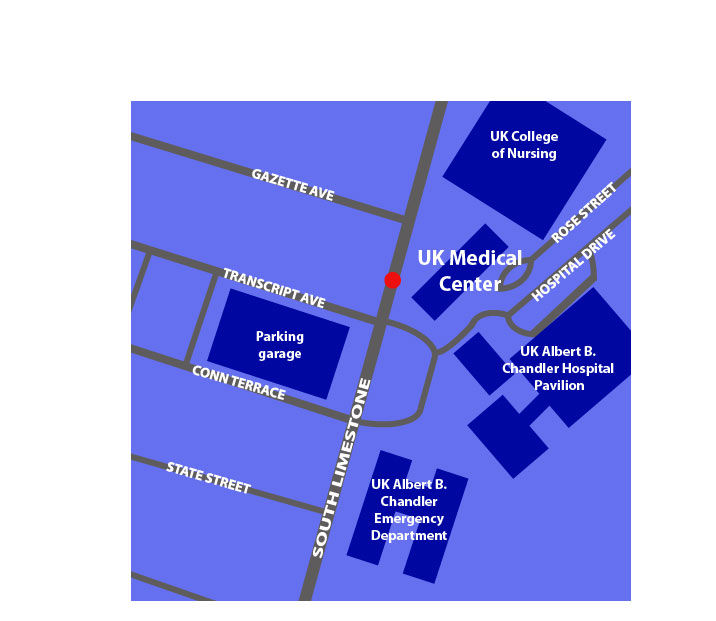 Map depicting the site of a motorcycle-car accident on S. Limestone on Wednesday, Sept. 20. The red dot indicates where the accident occurred.

UK senior Ryan Greenwell died Wednesday morning after a collision on his motorcycle with another vehicle on South Limestone in front of the UK Clinic, according to the Fayette County Coroner’s office.

South Limestone was closed from Virginia Avenue to Waller Avenue for a few hours while the Lexington Police Department reconstructed the scene.

Around 9:30 a.m., the driver of a Toyota Corolla was attempting to make a left turn on a flashing yellow light from South Limestone into the parking lot of the Kentucky Clinic, according to the Lexington Police Department Public Information Officer Brenna Angel.

Greenwell, a civil engineering student, had just turned from Gazette Avenue, between the Speedway and Shell, and was headed northbound on South Limestone when the collision happened, Angel said.

Hope Dow, a psychology junior at BCTC, witnessed the accident as she was headed to class.

“Me and my boyfriend were at the stop sign between Speedway and Shell and he was right in front of us, trying to turn left,” Dow said.

“It looked like he tried to brake and suddenly, his bike jerked and skidded and slammed into the car,” Dow said. “It looked really, really bad but in seconds people were running into the street and within a minute, an ambulance was there.”

Greenwell was pronounced dead at the scene, according to the coroner’s report.

Cincinnati-native Greenwell was a member of the Theta Mu Chapter of Delta Sigma Phi at UK, where he was toying with the idea of pursuing law school after graduation, according to a post on the fraternity’s Facebook page.

Jacob Ward, former president of Delta Sigma Phi, said Greenwell was an incredible guy, and one of the few people who seemed to care about others without having a reason to.

“I was already in the fraternity when Ryan was pledged,” Ward said. “He was so thoughtful and charismatic. He was just the kind of guy you would want to be around.”

Greenwell “truly embodied the qualities of a better man, an ideal that every brother of Delta Sig strives for,” the Facebook post read.

A GoFundMe account has been made to help Greenwell’s family offset the funeral costs. The page has surpassed its goal of $10,000.