Students take a knee to take a stand against social injustice 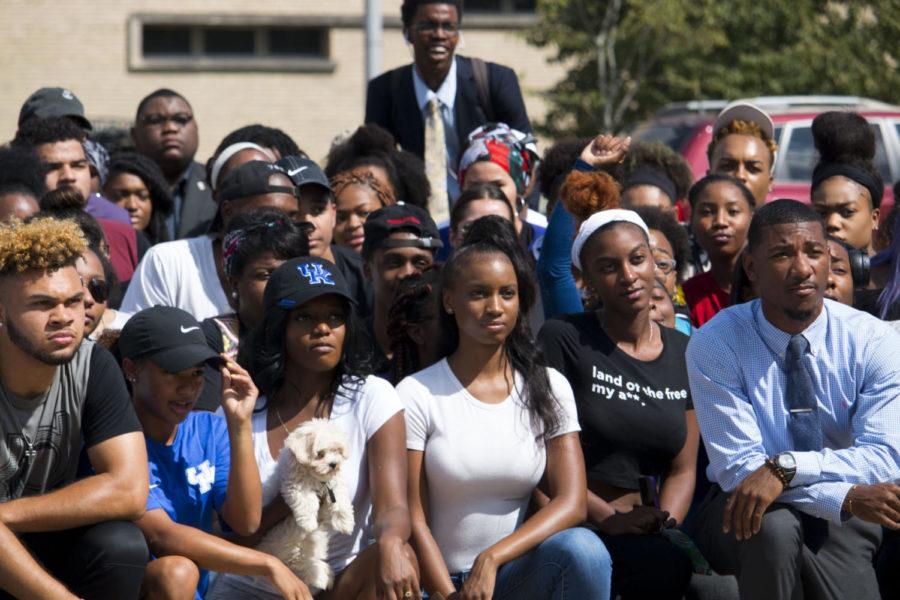 Students gather to take a knee to peacefully protest against social injustice and racial insensitivity at Bowman Statue on Tuesday, September 26, 2017 in Lexington, Kentucky. Photo by Olivia Beach | Staff

With raised fists and several signs, more than 100 students knelt next to the wildcat statue near Bowman’s Den on Tuesday afternoon.

According to flyers posted on social media, the #TakeAKnee protest invited students to take a knee as a show of “solidarity against social injustice and racial insensitivity in this country.”

“We just came out here as a statement of solidarity to protest injustice that we see going on in the country, dealing with black and brown people and cops as well,” Aaron Porter, a journalism senior and event organizer, said.

Brandon Coburn, a communications junior who helped organize the event, said this protest at UK was done to show support to the NFL athletes who protested the national anthem during Sunday’s and Monday’s games.

“We are against police brutality,” Coburn said. “We are against cultural insensitivity, we are against social injustice, so we as students on UK’s campus wanted to do something to show that we are in this with (those athletes).”

President Donald Trump’s comments at a political rally in Huntsville, Ala., on Friday, Sept. 22, has brought controversy to the sports world. At the rally, Trump said that players who refuse to stand during the national anthem should be fired. In response to Trump’s comments, an AP report said that over 100 NFL players sat, knelt or raised their fists during Sunday’s national anthems.

Porter said that Trump’s comments brought the NFL closer together.

“(Trump’s) comments kind of brought unity in a way,” Porter said. “His comments did invoke a change in the NFL and we saw something that we can do here on campus.”

On Sunday, Trump said that the actions of the players were “very disrespectful to our country.”

Coburn said that the national anthem and the flag does not mean the same for everybody.