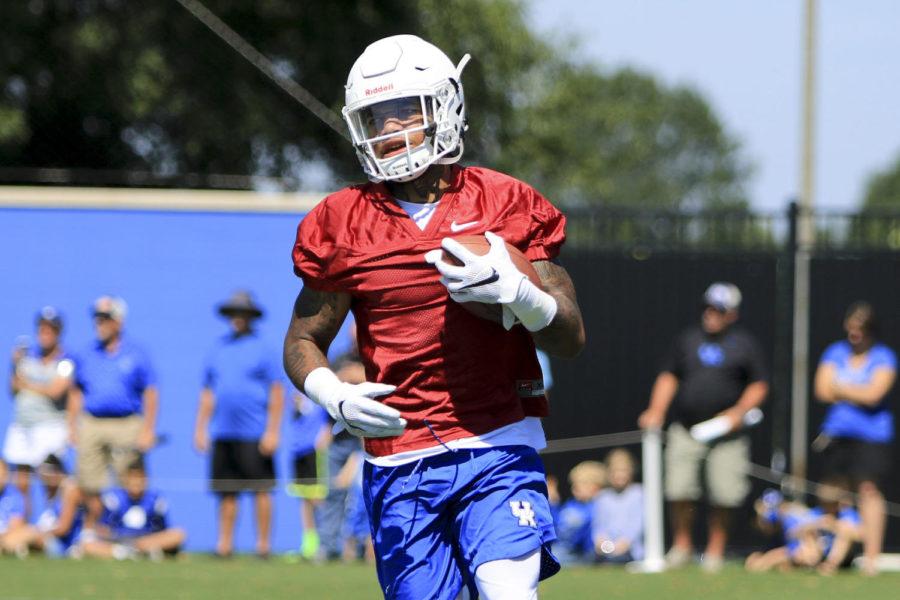 Lynn Bowden has been down a long, windy road leading to where he is now.

When Bowden first arrived to fall training a week late, he was tasked with learning the playbook and catching up to the others on the team, who had gotten a head start over him. At the same time, Bowden was trying to learn a new position that he hadn’t played before.

“Being able to adjust to the college speed, from high school coming to college, things are much faster, so that was my biggest challenge,” Bowden said after Tuesday’s practice.

However, Bowden has since impressed in practice, enough to warrant the talented freshman some playing time. Bowden didn’t touch the ball until the Cats’ second game against EKU, where he returned two kicks for 51 yards.

Bowden might’ve had the chance to return more kicks, or catch some passes in that game, but he was ejected on the Cats’ second offensive drive for a targeting penalty.

Now, however, Bowden is primed for a breakout performance against South Carolina on Sept. 16. Bowden has been slowed down by his late arrival and ejection, but he is finally ready to show spectators his skills.

“I love Big Blue Nation, I got a sense that they love me so I’m going to give them what they ask,” Bowden said.

If Bowden can provide what Big Blue Nation is asking, then he’ll be a big boost to UK’s thin wide receiver core after the injury to Dorian Baker.

Bowden is an electric playmaker who accounted for 57 touchdowns his senior year of high school. Bowden has the skillset to be used all over the offense and special teams.

However, UK fans have already seen Bowden returns some kicks and are ready to see him catch some passes. According to offensive coordinator Eddie Gran, that could come sooner rather than later.

“He’s going to have opportunities to catch the football in the game (against South Carolina),” Gran said. “It’ll be fun to see him in that environment and get some opportunities, hopefully we get the ball in his hands.”

In Bowden’s short time on campus, he has already impressed the guy who will be throwing passes his way, Stephen Johnson. Johnson has already had the chance to throw to Bowden in practice, where the freshman has done nothing but impress Johnson.

“His elusiveness, his speed, I mean he’s a really smart guy,” Johnson said. “We have so many plays descriptive for him and set up for him, I just can’t wait to see what he’ll do Saturday.”

It may have taken longer than Bowden anticipated, but the freshman could start being a valuable member of Kentucky’s offense starting as early as this Saturday. The Cats also have an added advantage as South Carolina doesn’t have much film of Bowden since he hasn’t played yet.

Regardless of what game plan the Gamecocks have for Bowden, he can only control what he does, and he plans give the Cats his best effort.

“Give it my all, as I would do any other game,” Bowden said on what he will do against the Gamecocks.