Mark Stoops knows the offense must improve before Saturday’s game 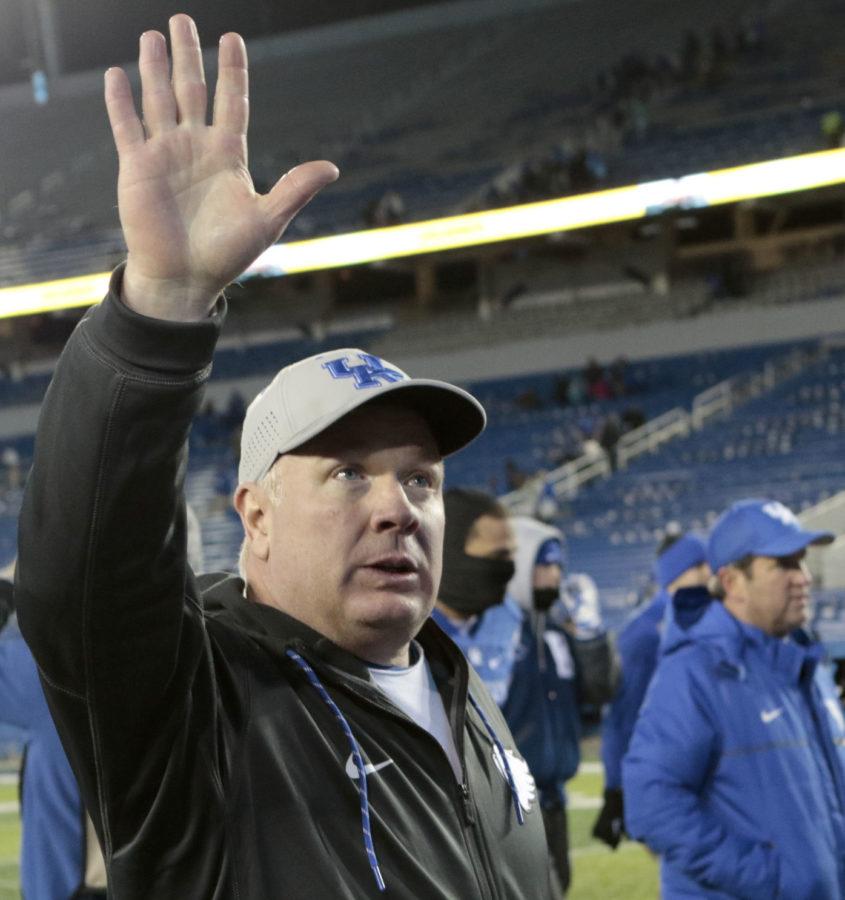 Head coach Mark Stoops waves to the crowd after the game against Austin Peay on Saturday, November 19, 2016 in Lexington, Ky. Photo by Hunter Mitchell | Staff

As UK Football gets ready for their home-opener against Eastern Kentucky, Mark Stoops made it known in his Monday press conference that the Cats need to improve before the Colonels come to town.

EKU lost their season-opener at Western Kentucky 17-31, but Stoops says there are many bright spots on EKU’s team that’ll present challenges to the Cats when they play at Kroger Field.

“We’re going to have to play much better, they’re an improved football team, they were very impressive on both sides of the ball,” Stoops said. “Very impressed with the way they threw the football, they threw for 320 yards last week against a very good Western team.”

However, Stoops is only able to control how his football team performs, as Stoops knows exactly where to start in terms of fixing last week’s mistakes.

The run game for Kentucky did not live up to expectations in the season-opener. Benny Snell, the main weapon in UK’s rushing attack, only averaged 3.3 yards per carry on 20 attempts.

All rushers averaged 2.2 yards per carry, as Sihiem King and Stephen Johnson both finished the game with some rushes.

Stoops said reasons for the poor rushing performance was impatience from the running backs, and the inability for the offensive line to open up holes. However, after looking at film after the game, Stoops believes those problems won’t be around long.

An area that won’t need much improvement before Saturday’s home opener is the defense.

The defense arguably was the main reason why the Cats won last Saturday, as they held Southern Miss to only 17 points while forcing four fumbles. Many members of the defense made plays that had a big impact on the game.

“24 players on our defense showed up with production,” Stoops said. “That jumped out at me as I was looking at things on the plane on the way home.

The impressive showing by the defense has Stoops optimistic, but the offense will have to step up before EKU comes to town.

Many have chalked Saturday’s game against EKU a win for the Cats since the Colonels are in the FCS, but Stoops knows that the Cats are vulnerable if the offense performs the way it did last Saturday.

“We have great respect for everybody we play, we know we’re not a team that you can just go out there and beat anybody,” Stoops said. “We have to be on point and we have to play the game.”