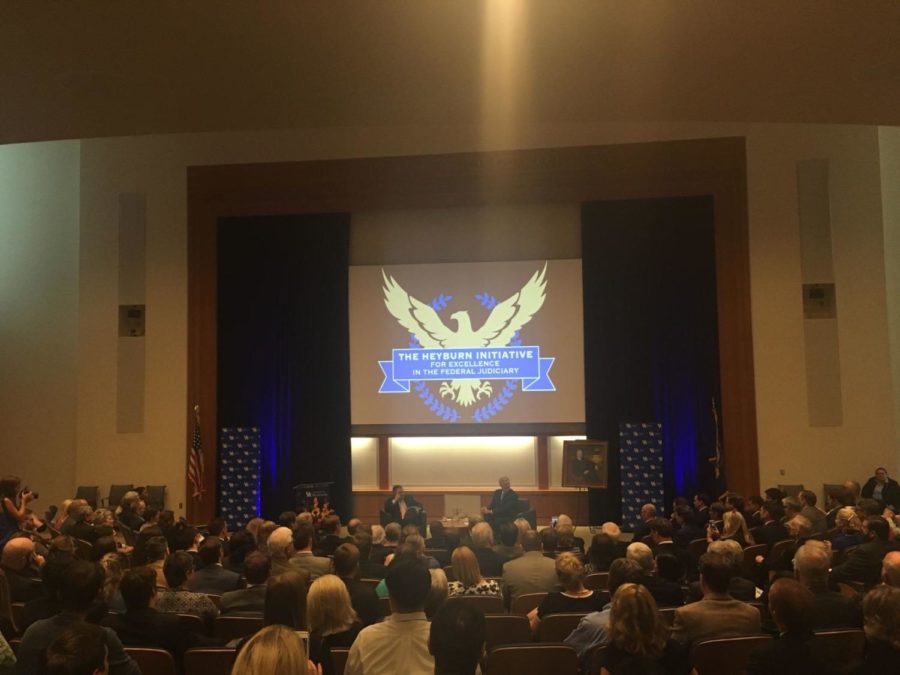 Supreme Court Associate Justice visits UK at an event hosted by UK College of Law and the Heyburn Initiative on Thursday, Sept. 20.

More than 20 years ago, the Honorable Neil M. Gorsuch was a law clerk for the United States Supreme Court.

His bosses were Justices Byron White and Anthony Kennedy. As of April of this year, he again works at the Supreme Court office, but his job is a bit different: He is the newest associate justice.

On the evening of Sept. 21, he held his first public lecture since becoming a justice. It was in UK’s Kincaid Auditorium.

The event was hosted by UK College of Law and the John G. Heyburn II Initiative for Excellence in the Federal Judiciary, which is national, non-partisan and dedicated to the preservation of U.S. judicial history. It is based in Kentucky, and it has now hosted two events at UK, including last year when Chief Justice John Roberts visited.

In a discussion moderated by Wendell H. Ford Professor of Law Paul E. Salamanca, Gorsuch spoke more of his fellow justices, as well as past justices, than he did of himself.

He said taking his seat on the bench was “humbling and daunting,” and his first week on the job was full of deja vu because of his year clerking there.

His former bosses White and Kennedy are two of the biggest impactors on his life and career, he said.

Salamanca asked Gorsuch what advice he had for the law students in the room; all third-year law students were invited to attend.

“You gotta work hard,” Gorsuch said. “There’s just no way around it.”

He said the students should work so that they can be proud at the end of their careers.

“Don’t forget why you came to law school in the first place,” he added.

First-year law student Marianna Januario said it was hard to explain exactly why she came to law school, but she has been interested in law since her junior year of high school. She took a special program class about the Constitution.

“That just grabbed my interest,” she said.

While getting her undergraduate degree at Smith College, she never lost interest in law.

She said that the most impactful part of Gorsuch’s discussion tonight was his advice to work hard, even though everyone— including her law professors— says it. She said hearing someone in such a high position say working hard got him there reinforced the advice for her.

“It’s a hard profession, but it’s worth it,” she said of becoming a lawyer.

Brennen thanked Gorsuch for coming to “the heart of the bluegrass.”

Gorsuch will meet with a small group of law students on Friday morning. All law students were eligible to enter a lottery, which randomly selected those who could attend.