Stump through the years 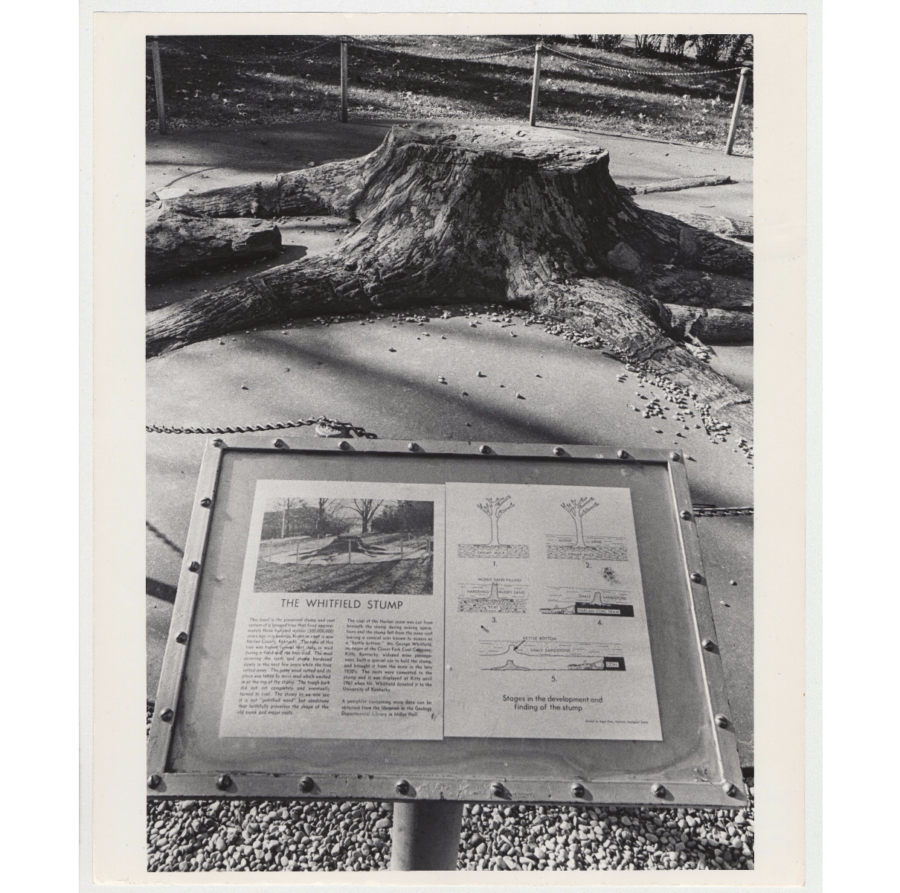 "The Whitfield Stump, located beside the White Hall Classroom Building in the center of the Lexington campus, is a three-hundred-year-old 'cast' stump weighing 7,000 pounds and measuring 42 inches in diameter. The stump was first discovered when it dropped from the roof of the Clover Fork Coal Co., Kitts, KY and later was given to the University by George Whitfield, manager of the coal company."

“There are hundreds of stumps on the UK campus, but only one of them is 230 million years old.”

So began the front-page story of the November 29, 1961, edition of the Kentucky Kernel.

More than five decades later, that stump could still be found on UK’s campus, in front of White Hall Classroom Building.

But students returning to campus for the Fall 2017 semester found not a stump there but another sidewalk. Were students now walking over the stump’s grave to get to class?

No they weren’t. The stump was removed from its long-time location, but is being relocated.

The stump has been on UK’s campus for a long time, but it is a fraction of the stump’s history.

Hundreds of millions of years ago, the stump was a tree in a swamp.

The swamp developed across parts of eastern Kentucky, according to Earth and Environmental Sciences professor Frank R. Ettensohn. Within the swamp was decaying organic matter that eventually became coal.

A lycopod tree grew on top of that matter, sending its roots down into it, Ettensohn said. Upper parts of the tree eventually died, but sand filled the area and buried the trunk.

The organic matter decayed, but the bark remained, leaving an open cast of the tree trunk. That cast was then filled with silt, forming an internal mold.

Over the years, “everything lithified,” Ettensohn said, meaning it became more rock-like.

Fast forward millions of years. What was once a swamp had become Harlan County, Kentucky, and the economy depended on coal mining.

The Clover Fork Coal Company, managed by George Whitfield, was mining the coal under the stump in 1938. The stump then fell from the mine roof, leaving a scar called a kettle bottom, according to a Kentucky Geological survey pamphlet.

The company widened the mine passageway and built a special car to transport the stump out of the mine.

La Donna Leavelle, a Kernel staff writer, reported in 1961 that the trunk’s diameter is 42 inches, while the attached roots’ diameter is 16 feet.

For more than 20 years, the stump was displayed in Kitts, Kentucky, an unincorporated coal town in Harlan County.

But in 1961 it found its way to UK, when Whitfield donated it to the UK Department of Geology. That department is now part of Earth and Environmental Sciences.

“It would be very controversial today,” said Terry Birdwhistell, UK Senior Oral Historian, of a university receiving a gift from coal miners.

UK’s campus in 1961 looked very little like it does today.

There was no White Hall Classroom Building, but there was its namesake, the White Hall men’s dorm. It was located where Patterson Office Tower is today, according to Birdwhistell.

There was a library, but not today’s beloved William T. Young Library. An engineering complex was located near the stump, but it was not the sprawling group of engineering buildings on campus today.

The Main Building and Miller Hall saw the addition of the stump, and they remain standing.

Birdwhistell said the main changes to campus since the stump arrived came in the late 1960s, when several buildings were torn down. White Hall Classroom Building and Patterson Office Tower were completed in 1968, according to UK’s website.

“(The stump) did see a lot of changes,” Birdwhistell said.

In addition to seeing buildings built and demolished, the stump saw some burn.

In May of 1970, UK students protested the shootings at Kent State University.

During the protests, the ROTC building at the time was destroyed by fire, according to Explore UK. The cause of the fire was never officially determined.

The Administration Building came to campus almost a century before the stump, but the stump outlasted it. In 2001, UK’s “oldest and most historic building became engulfed in flames and smoke,” according to the UK Libraries Special Collections Research Center.

The stump was at UK for 11 of the 42 years that Adolph Rupp was, and for four NCAA men’s basketball national championships. It wasn’t far from the Grehan Journalism Building when the Kernel became independent from the university in 1972. It was there in 1962 when a mandate required that UK form a community college system.

The stump has called UK its home for more than a third of the time that there has been a UK.

He said he wouldn’t put the stump on the same landmark list as Memorial Hall and Memorial Coliseum, for example.

He said he can’t be sure if something like the stump is unique to UK’s campus, because “there’s something weird on most campuses.”

“Let’s put it this way: I don’t think any other campus has a petrified stump of a tree that fell through the ground of a swamp and ended up in a coal mine and was discovered by coal miners,” Birdwhistell said. “I think we’re pretty safe on that one.”

Birdwhistell said the stump’s presence on campus reminds him of President Eli Capilouto’s calling UK the University for Kentucky.

“This shows the reach of UK that somebody in Harlan County would want to give that to the University of Kentucky,” Birdwhistell said.

Birdwhistell said the stump is something that UK students from Harlan County could be proud of.

Currently, the stump is wrapped up in storage.

In late October, the stump will be installed at its new home, the entrance of the Mining and Minerals Resources Building, according to Mary Vosevich, Facilities Management Vice President and Chief Facilities Officer. The new location is currently being prepared.

“The decision was made to move the stump to protect and preserve it,” Vosevich said. “Over the years, there has been some deterioration and cracking. It was overdue for attention.”

Vosevich said UK hired a preservation company to relocate the stump. She said several classes use the stump for various purposes.

Because of its relocation, this piece of Kentucky history will be preserved for future students to study or simply walk past on their way to class.

The November 29, 1961, edition of the Kernel boasted that the “stone age lives again.” In part because of the stump, so do the last 56 years of UK’s history.