UK women’s soccer comes up short against No. 3 South Carolina 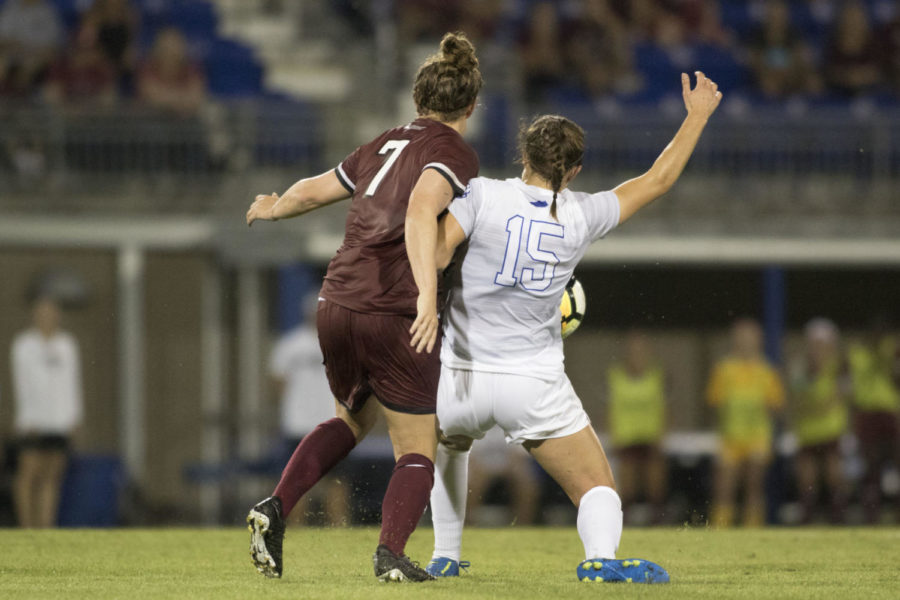 Sophomore midfielder Gina Crosetti defends the ball during the game against South Carolina on Thursday, September 21, 2017 in Lexington, Kentucky. The Cats lost 0 to 1. Photo by Arden Barnes | Staff

Thursday night’s match for UK women’s soccer was a huge one, as the Cats hosted No. 3 South Carolina. The Gamecocks entered the Bell with the No. 1 RPI ranking and a strong 7-1 record, their only loss coming to Wake Forrest in August.

The energy in the stadium was electric as 1,173 people walked through the entry gates in their white shirts to participate in this “white out” game. With the atmosphere and the worthy opponent, this was undoubtedly a huge match up for the Cats.

However, UK would fall just short of their sixth win on the season, losing to the Gamecocks 1-0.

It was evident after just the first 10 minutes of the game that the Cats were going to have their work cut out for them. The Gamecock’s offensive was explosive and their defense was suffocating.

The first half belonged to UK’s sophomore goalkeeper Evangeline Soucie, who showed no fear of the Gamecocks’ offense. By the end of the first half she already had three crucial saves to keep the score at 0-0 going into the half.

Fouls were a problem for both teams during the first half. UK committed four fouls while South Carolina committed three. This was very much a physical game.

UK ended the first half with zero shots on goal despite having multiple good possessions. Both teams earned one corner kick a piece in the first half as well.

The crowd’s enthusiasm continued to hold strong and even increase during the second half, and the Cats were definitely feeding off their energy throughout the entire game.

UK fans roared in excitement as freshman midfielder Yuuka Kurosaki subbed into the game in the 58th minute for her first game appearance since the Florida State game on Sept. 3. She has been out with a strained MCL.

The first goal of the game didn’t come until the 80th minute from South Carolina forward Savannah McCaskill, making the score 1-0 in favor of the Gamecocks.

“I think as a team we took a really big step forward,” Soucie said. “We improved on the things that we needed to improve on to give ourselves a chance against the number one team in the country (in RPI rankings). I thought we played them well and gave them a good game. There’s a lot of positives to take away from this.”

Aside from the one goal that South Carolina scored, Soucie finished the game with seven saves.

UK women’s soccer is back in action on Sunday with a road game against Auburn at 3 p.m. The Cats are looking for their first SEC win of the season.