Fans enjoying the experience of camping out for madness tickets 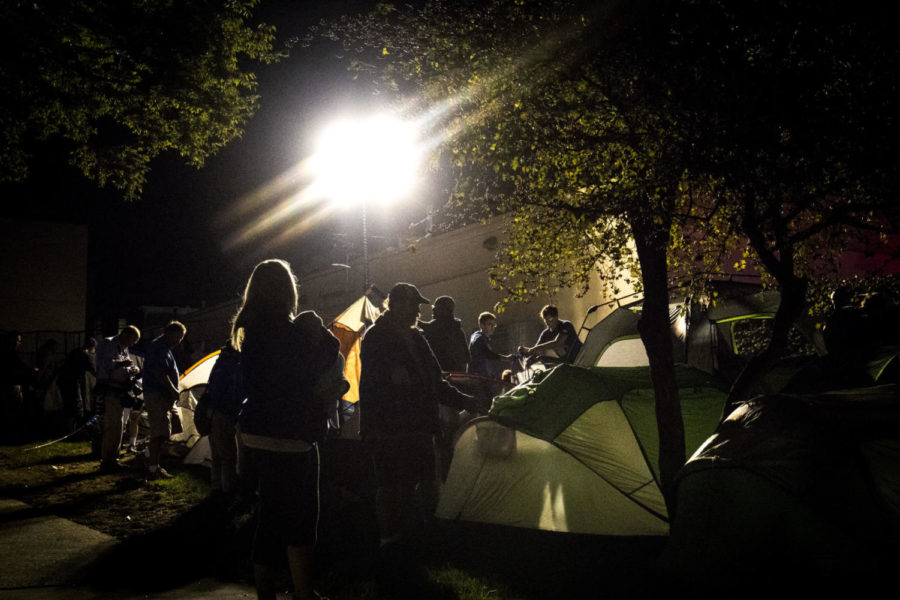 UK basketball fans secure their spot to campout to buy tickets to Big Blue Madness on the lawn outside Memorial Coliseum on Wednesday, September 27, 2017 in Lexington, Kentucky. Big Blue Madness will be held on Friday October 13, 2017 at Rupp Arena as the beginning to the 2017-2018 basketball season. Photo by Arden Barnes | Staff

Kentucky’s men’s and women’s basketball teams will be debuted on Oct. 13 at Big Blue Madness in Rupp Arena. The annual showcase features introductions to the players and coaches, practice drills, former players’ appearances, videos and much more to give fans a glimpse into the upcoming 2017-2018 basketball season.

However, before the Madness even takes place, fans have to get tickets to get in, and a lot of the die-hard fans get their tickets at the Big Blue Madness Campout.

As of Thursday morning, all of the camp sites have been filled as 295 tents had been setup. One of those tents belongs to Lora Boyadjieva, a sophomore at UK. This year is Boyadjieva’s fourth year camping out for Big Blue Madness tickets, and she keeps coming back because she enjoys it.

“It’s way more fun to wake up at 3 a.m. to run across the street to earn your spot,” Boyadjieva said.

Boyadjieva arrived at UK’s campus early because there are a limited number of spots for the campout. Once capacity has been filled by campers, “leftover” fans will be encouraged to go online to Ticketmaster.com to buy tickets there.

However, Boyadjieva has made sure she gets a campsite every year because she enjoys the experience as a fan. Fans have been spending time playing cornhole, watching television sets in their tents and talking with new people in neighboring tents who have one thing in common: a love for the Big Blue Nation and Kentucky basketball.

Boyadjieva also has the benefit of having someone connected to the campout, who helps her get a good spot.

“My dad’s friend and boss is the ‘mayor’ of tent city, so we always get the best seats,” Boyadjieva said.

Camping out for a ticket is more than just being tired from three whole days of being in an uncomfortable tent. It’s about meeting new fans and sharing your love of the sport with them to be able to see the newest group of Kentucky basketball players for the first time in Rupp Arena.

“Even if you don’t care for UK basketball, it’s a great show,” Boyadjieva said.